Book Looks at the Universe's Many Royal Flushes

Book Looks at the Universe's Many Royal Flushes

The fascinating question of cosmic fine-tuning has been given a very impressive and comprehensive treatment in the recent book A Fortunate Universe: Life in a Finely Tuned Cosmos by astrophysics professor Geraint F. Lewis and astronomy postdoctoral researcher Luke A. Barnes. The book looks at the many ways in which our universe seems to have improbably “hit the jackpot” or “won the lotto,” having a series of incredibly lucky breaks that were necessary for our eventual existence. On page 29 the authors describe the thesis of a fine-tuned universe like this: “The claim is that small changes in the free parameters of the laws of nature as we know them have dramatic, uncompensated, and detrimental effects on the ability of the universe to support the complexity needed for physical life forms.”

One case involves the existence of abundant carbon and oxygen in the universe, two elements that must exist in abundance for life to exist. Carbon and oxygen didn't exist in the early history of the universe, which was almost entirely hydrogen and helium. Carbon and oxygen were formed gradually by stars. A great deal of luck is required for any universe to be able to produce either carbon or oxygen; and for a universe to produce abundant amounts of both carbon and oxygen, some fantastically improbable strokes of luck are required. The authors note this on pages 118-119 (referring to the strong nuclear force that binds protons and neutrons in the nucleus of the atom):

If we nudge the strength of the strong force upwards by just 0.4 per cent, stars produce a wealth of carbon, but the route to oxygen is cut off. While we have the central element to support carbon-based life, the result is a universe in which there will be very little water. Decreasing the strength of the strong force by a similar 0.4 per cent has the opposite effect: all carbon is rapidly transformed into oxygen, providing the universe with plenty of water, but leaving it devoid of carbon.

Protons and neutrons are made up of smaller particles called quarks. A proton is made of two up quarks and one down quark, while a neutron is made of two down quarks and one up quark. On page 50 to 51 of the Fortunate Universe book, we are told some reasons why a life-bearing universe requires that these quark particles have masses not too far from the mass they have. If the down quark was about 70 times more massive or the up quark was about 130 times more massive, there would be only one element, and complex chemistry would be impossible. More sensitively, if the up quark was more than six times more massive, protons could not exist, and there would be no atoms. But later we learn of a much more sensitive requirement demanding that the quark masses be almost exactly as they are in order for the universe to be hospitable for life.

Reiterating the conclusions of this scientific paper, the book also notes on page 120 that we would not have a universe with abundant carbon and oxygen if the quark masses were different by much more than a few per cent. The book notes how improbable such a case of “hitting the distant bulls-eye” was:

And remember from last chapter that because the quarks are already “absurdly light” in the words of physicist Leonard Susskind, a range of mass that is a small percentage of their value in our Universe corresponds to a tiny fraction of their possible range. It is about one part in a million relative to the Higgs field, which gives them their mass. It is about one part in 1023 relative to the Planck mass!

On page 75 of the book we have a diagram that is basically the same as the diagram below from an article by one of the authors. The author shows that if you make random values for the strong nuclear force and a fundamental constant called the fine structure constant, then only a very tiny fraction will allow carbon-based life. Because the graph uses a logarithmic scale, it visually exaggerates the size of the tiny white rectangle. If you were to program a computer to assign random numbers for these two (the strong nuclear force and the fine structure constant) between 0 and 1000, less than one in a million times would the numbers end up within the tiny white rectangle.

On page 63 the book has a discussion of fine-tuning involving the Higgs mass and Higgs boson:

Life requires a value not too much different to what we observe. There must be an as yet unknown mechanism that slices off the contributions from the quantum vacuum, reducing it down to the observed value. This slicing has to be done precisely, not too much and not so little as to destabilize the rest of particles. This is a cut as fine as one part in 1016...This problem – known as the hierarchy problem – keeps particle physicists awake at night.

On page 111 of the book we are told about some ways in which the strong nuclear force is sensitive to changes:

A small decrease in the strength of the strong force by about 8 per cent would render deuterium unstable. A proton can no longer stick to a neutron, and the first nuclear reaction in stars is in danger of falling apart. An increase of 12 per cent binds the diproton – a proton can stick to another proton. This gives stars a short cut, an easy way to burn fuel. If the diproton were suddenly bound within the Sun, it would burn hydrogen at a phenomenal rate, exhausting its fuel in mere moments. 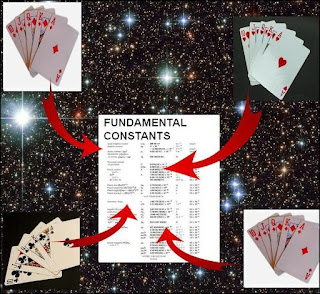 So many royal flushes

Then there is the cosmological constant problem, the case of fine-tuning discussed here. It's the issue that quantum field theory predicts that ordinary space should be very densely packed with quantum energy, making it even denser than steel. But somehow we live in a universe that has only the tiniest sliver of the vacuum density that it should have. Below is what page 162 of the book has to say about this:

Maybe there is a mechanism at work here, a mechanism that we clearly don't yet understand, which trims the energy in the quantum vacuum; so, while it is intrinsically very large, the value we observe, the value that influences the expansion of the universe, appears to be much, much smaller. But this would have to be a very precise razor, trimming off 10120 but leaving the apparently tiny amount that we observe....But what if this mechanism for suppressing the influence of the cosmic vacuum energy was not so efficient, removing the effect of 10119 rather than 10120, so there would be ten times the vacuum energy density we actually measure? Remember, such vacuum energy accelerates the expansion faster and faster, emptying out the Universe, cutting off the possibility of stars, planets, and eventually people.

Another objection appeals to the existence of a multiverse: maybe there are an infinity of universes, and in such a case the odds of one of them being successful might be good. This is not a sound objection because it merely increases the number of random trials; and increasing the number of random trials does nothing to increase the chance of any one random trial succeeding. If you drive into Las Vegas and drive out with $50,000,000 in your car, that's an astonishing piece of luck; and it's no less astonishing if there are an infinity of such lucky winners scattered across an infinity of universes in which an infinity of different things happen. Adding a multiverse does not increase the odds of lucky events in any one particular universe such as ours.

In so many different ways (physics, cosmology, biology) the universe seems to scream at us in a thundering voice: “Purpose and non-randomness!” But all this falls on the deaf ears of many experts in academia who keep summarizing things by telling us, “It's all just randomness.”