Disastrous Blunders of the Experts

Disastrous Blunders of the Experts

Often when someone wants to get you to believe in some dubious doctrine popular among some current group of experts, that person will basically tell you, “Trust the experts!” The reasoning is that when some group of experts reaches a consensus, it is very likely to be true. But history is full of examples in which the opinions of experts were not merely wrong, but disastrously wrong. Below are some examples, many from recent history.

When John Kennedy assumed the office of US President in 1961, he found that his experts were unanimously (or all but unanimously) in favor of the Bay of Pigs invasion. This was a harebrained scheme of dumping on the shores of communist Cuba a group of 1400 Cuban exiles. The experts believed that this small group could whip up an insurrection that would lead to the downfall of Cuban dictator Fidel Castro. The invasion very quickly failed, with more than 1000 being captured. Commenting on how wrong the advice was, Kennedy later said, “The advice of those who were brought in on the executive branch was also unanimous, and the advice was wrong.” By creating worries of Cuba being invaded, the failed Bay of Pigs invasion helped to sow the seeds of the Cuban Missile Crisis of the next year, in which the world was brought to the brink of atomic destruction.

In his book The Best and the Brightest, journalist David Halberstam documented the disastrous role of expert advice in the Vietnam War. A group of intellectually brilliant US experts (many with Ivy League credentials) urged full American military involvement in the conflict between North Vietnam and South Vietnam. President Kennedy to some degree and Presidents Johnson and Nixon to a much larger degree took the advice of the experts. The result was a disastrous treasury-draining war that ended up costing more than 58,000 US lives, and many times more Vietnamese and Cambodian lives. The war ended in defeat for the United States, as South Vietnam was taken over by communist North Vietnam. The experts kept pushing a “Domino Theory” which maintained all of Southeast Asia would go communist if South Vietnam become communist. After the war was lost, the theory's prediction did not come true.

In the decades prior to World War II, the academic scientific community embraced theories of eugenics, including ideas that certain “inferior” people should be encouraged or forced to be sterilized. Almost every major college or university offered a course in eugenics. Over 62,000 people were forcibly sterilized in the United States alone. After it became clear that the Nazis had embraced eugenics, and used it to try to justify their senseless slaughter of millions in concentration camps, eugenics started to fall out of favor.

In the years 2003 to 2005 a huge bubble arose in the US housing market, with housing prices inflating to unreasonable heights. Quite a few independent bloggers who were not financial experts began to raise alarm bells that a housing bubble had arisen, and was about to pop, causing prices to plunge. But the financial experts on Wall Street almost completely failed to alert people to such a possibility. When house prices started to fall between 2006 and 2008, the experts on Wall Street almost all failed to understand the financial disaster that was unfolding. At one point the experts at Standard and Poor's agency gave an AAA rating to CDO securities, which officially signified that there was only about 1 chance in 800 that such securities would default. But it turned out that 28% of these same securities defaulted. Based largely on the astonishingly bad judgments of financial experts, the financial meltdown of 2008 ended up causing countless home foreclosures, a sharp rise in unemployment that lasted for years, and a huge stock market decline that wiped out a good fraction of the retirement savings of millions of people.

Expert Fiasco #5: Blunders of the Psychiatrists

In the field of psychiatry there have since 1950 been three huge blunders supported by experts. One was support for lobotomies as a treatment for mental illness. Lobotomy surgeries were widely supported for decades, although they are now generally regarded as a grotesque horror. Another error was classification of homosexuality as a mental disease. It was only in 1973 that psychiatrists stopped classifying homosexuality as a mental disorder. For decades before that, people discovered to be homosexuals were often forced into bizarre treatments that are now looked on as senseless interventions. A third blunder of the psychiatrists was a dogmatic embrace of the dubious doctrines of Freud, such as his weird theory that much of mental illness was caused by sex-related conflicts stemming from early childhood. The popularity of Freudianism is declining, but for decades his farfetched dogmas were embraced by a large fraction of psychiatrists.

In 2002 and early 2003 the United States government led by George W. Bush tried to whip up public support for an unprovoked invasion of Iraq. The rationale given was that Iraq had assembled terrifying “weapons of mass destruction” that were a threat to the United States. In the time between October 2002 and March 2003 I remember seeing a long parade of experts on my television screen, almost all of which assured us that the coming invasion of Iraq was a wise step that was vitally necessary. Many of these experts said that the invasion was something that would be a breeze. Even though United Nations weapons inspectors had searched the country in the months before March 2003, finding no weapons of mass destruction, the experts told us such weapons would be found.

In March 2003 the unprovoked invasion was launched. No Iraqi weapons of mass destruction were found. The war ended up being a big treasury-draining disaster, leading to more than 4000 US soldier deaths, and more than 30,000 US soldier injuries. The total number of Iraqis that died from the invasion and its resulting unrest has been estimated between 151,000 and more than a million. In the following years, the nation of Iraq suffered very frequent suicide bombings and almost constant violent unrest, with the eventual loss of a large fraction of the country to crazed ISIS fanatics. The price tag for this misadventure was countless trillions of US dollars.

The drug called Vioxx (also known as rofecoxib) was developed by Merck to treat arthritis and its associated pain. The scientific experts at the Food and Drug Administration gave Vioxx their approval in 1999. In the following years doctors also gave the drug their approval, writing some 80 million prescriptions for the drug. But the drug was actually very dangerous, and the wikipedia.org article on the drug says that it caused “between 88,000 and 140,000 cases of serious heart disease.” Finally in 2004 Merck withdrew the drug.

We are currently in the middle of an opioid overdose epidemic. A CDC site tells us, "From 2000 to 2015 more than half a million people died from drug overdoses." Very many of these come from prescription pain medicines that were over-prescribed by doctors. The CDC site says this:

When the atomic bomb was being developed, physicists thought there was a substantial chance that the first atomic explosion might ignite the atmosphere, destroying all life on earth. This fact has been whitewashed by many accounts claiming that they made calculations that there was no chance of such an ignition. But Chapter 17 of Daniel Ellsberg's book The Doomsday Machine makes quite clear that physicists still thought there was a significant chance of such a planet-killing event when the first atomic bomb was exploded in July, 1945. At one point Enrico Fermi estimated the chance at 10 percent, according to one source.

Physicists should have advised that exploding an atomic bomb was an unacceptable risk. Instead, they allowed the testing to occur. They then supported the creation of ever more destructive bombs including hydrogen bombs vastly more powerful than atomic bombs. For decades the world was put at grave risk of nuclear destruction -- all of which could have been avoided if Fermi and his colleagues had done the right thing and said that any test of any atomic bomb was an unacceptable risk.  The atomic bomb was not needed for Japan's defeat, as a naval blockade and relentless aerial firebombing were creating equivalent military pressure in the summer of 1945.
Why Experts Are So Often Wrong

We still see spectacular errors being committed by experts. A very recent example was the fact that prior to the 2016 election of Donald Trump, the great majority of political pundits predicted very confidently that Trump would lose the election. Then there was the BICEP2 affair. In March 2014 scientists announced they had proof of primordial gravitational waves proving the cosmic inflation theory. Almost the entire community of physicists and cosmologists endorsed this claim. By the end of 2014 it had become clear that BICEP2 had detected something that could just as easily be mere dust, and the claims of an important scientific finding were retracted. In this case the red flags were there from March 2014, so there was no excuse for this erroneous bandwagon effect. Then there was the 2016 affair of the 750 GeV diphoton resonance. A certain signal blip showed up at the Large Hadron Collider, and physicists wrote more than 500 scientific papers about this blip, speaking as if this was some matter of great cosmic importance. By July 2016 it had become clear that the signal blip was mere random noise, of no significance at all.

Is there some general reason why experts often get things wrong? There seems to be such a reason. It is the fact that experts often are trained in ideological enclaves. An expert typically becomes an expert by volunteering for some particular graduate or specialized training program at a university or in the military. These graduate programs are often ideological enclaves, places where there predominates some particular ideology not embraced by most people.

The fact that the graduates of such programs are volunteers creates the opportunity for sociological selection effects. Let's imagine an extreme example. Let's imagine there arises some new discipline called tricostics. It might be the opinion of 90% of those who have read about tricostics that tricostics is pure nonsense. But tricostics might be “all the rage” at some Graduate Program in Tricostics Studies at a particular university, or some Pentagon training program specialized in tricostics. The people who sign up for such a program might almost all be from the tiny fraction of the population that believes in tricostics. At this particular program there might then be tremendous sociological pressure for students to embrace tricostics. So 90% of the graduates of this tricostics program might be believers in tricostics, even though a randomly selected jury from the general population would probably conclude tricostics is worthless nonsense. 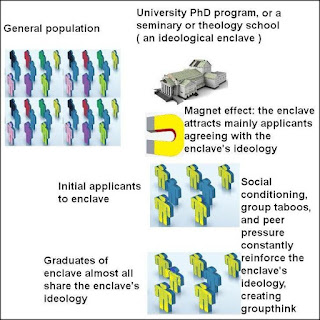 An expert existing in some ideological enclave may get be filled with dogmatic overconfidence about some opinion that is popular within his little ideological enclave. He may think something along the lines of: “No doubt it is true, because almost all my peers and teachers agree that it is true.” But the idea may seem senseless to someone who has not been conditioned inside this ideological enclave, this sheltered thought bubble.

A good rule is: decide based on the facts, and not merely because there is some consensus of experts. 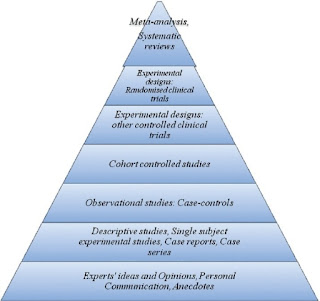 Postscript: See this post for another case of a disastrous blunder by experts.  The post states that were between 340,000 to 690,000 US deaths caused by atomic testing. The US government presumably polled the experts about whether it was safe to test atomic weapons above ground, and there was presumably a consensus of experts that such above-ground testing was safe.  The result was probably more US deaths than from the bombs dropped on Japan.
View on Mobile