They Had Flourishing Minds But Broken Brains

Recently there was published a superb scientific paper describing cases of very high mental activity despite very great brain damage. Entitled "Discrepancy Between Cerebral Structure and Cognitive Functioning," the paper (authored by two PhD's and an MD) will be read by some who are merely interested in reading about weird curiosities. But a better way to read the paper is to examine its examples and ask: is the standard “mind from brain” dogma taught by neuroscientists (the dogma that minds are generated by brains) consistent with these examples? Together the examples seem to provide a very strong challenge to such a dogma.

On page 1 we learn of a case reported by Martel in 1823 of a boy who after age five lost all of his senses except hearing, and became bed-confined. Until death he “seemed mentally unimpaired.” But after he died, an autopsy was done which found that apart from “residues of meninges" there was "no trace of a brain" found inside the skull. How could the boy have seemed “mentally unimpaired” with almost no brain?

The paper then discusses a case examined by physician John Lorber, who studied many patients with hydrocephalus, in which healthy brain tissue is gradually replaced by a watery fluid. A mathematics student with an IQ of 130 and a verbal IQ of 140 was found to have “virtually no brain.” His vision was apparently perfect except for a refraction error, even though he had no visual cortex (the part of the brain involved in sight perception).

We are told that of about 16 patients Lorber classified as having extreme hydrocephalus (with 90% of the area inside the cranium replaced with spinal fluid), half of them had an IQ of 100 or more. The article mentions 16 patients, but the number with extreme hydrocephalus was actually 60, as this article states, using information from this original source that mentions about 10 percent of a group of 600. So the actual number of these people with tiny brains and above-average intelligence was about 30. The article states:

Lorber's cases date from several decades ago, but more recent cases have been reported of people with good mental functioning despite having almost all of their brains replaced by a watery fluid due to hydrocephalus. The scientific paper cites the cases below:

Another interesting case is that of a 44-year-old woman with very
gross hydrocephalus described by Masdeu (2008) and Masdeu et al.(2009). She had a global IQ of 98, worked as an administrator for a government agency, and spoke seven languages. In Leipzig, Germany, staff members of the Max Planck Institute for Human Cognitive and Brain Sciences recorded a similar case. A man was examined because of his headache, and to his physicians' surprise, he had an “incredibly large hydrocephalus.” Villinger, the director of the Cognitive Neurology Department, stated that this man had “almost no brain,” only “a very thin layer of cortical tissue.” This man led an unremarkable life, and his hydrocephalus was only discovered by chance (Hasler, 2016, p. 18)

The paper informs us of cases of people who functioned well despite losing half of their brains. We are told of a 36-year-old man whose “intellect and language abilities were unimpaired” despite the fact that the left hemisphere of his brain was “almost completely lacking.” We are told of a boy who was an average student at a regular school, even though he had a “nearly complete absence” of the right hemisphere of his brain. The paper also cites cases of people who had large portions of their brain missing, but who did not notice any problem until they had seizures or headaches. The paper states this:

For example, Baudoin (1996) described the case of a 30-year-
old woman who had a large lesion on her right cerebral hemisphere. The right occipital and parietal lobes were entirely missing, as well as the inferior part of the right temporal lobe. The brain lesion was discovered only because of the patient's first seizures at the age of 30. Similarly, Duyff et al. (1996) presented the case of a 32-year-old lawyer whose brain showed a large arachnoid cyst in the right frontotemporal region that had displaced (or replaced) the temporal lobe and parts of the frontal and parietal lobes. His development had been completely normal, and no abnormalities were discovered upon neurological examination. His condition was discovered only because he had a persistent headache after a skiing accident in which he had fallen on his head.

Hemispherectomy is a surgical procedure in which half of the brain is removed. I knew that the procedure can be performed on young children suffering from seizures, with surprisingly little negative impact. But the paper also tells us on page 3 that
“Although most hemispherectomies are performed on young children, adults are also operated on with remarkable success.” 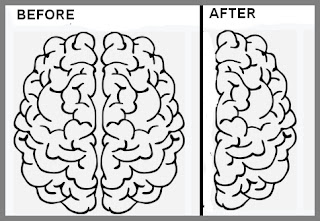 Schematic diagram of a hemispherectomy

Very interestingly, we are told that when half of their brains are removed in these operations, “most patients, even adults, do not seem to lose their long-term memory such as episodic (autobiographic) memories.” The paper tells us that Dandy, Bell and Karnosh “stated that their patient's memory seemed unimpaired after hemispherectomy,” the removal of half of their brains. We are also told that Vining and others “were surprised by the apparent retention of memory after the removal of the left or the right hemisphere of their patients.”

The paper then tells the case of Kim Peek, an autistic savant who had no corpus callosum (the “bridge” connecting the two brain hemispheres). Much of Peek's brain consisted of empty areas filled with cerebrospinal fluid. But still “he memorized more than 12,000 books, apparently verbatim.”

On page 59 of the book The Biological Mind, the author states the following:

A group of surgeons at Johns Hopkins Medical School performed fifty-eight hemispherectomy operations on children over a thirty-year period. "We were awed," they wrote later of their experiences, "by the apparent retention of memory after removal of half of the brain, either half, and by the retention of the child's personality and sense of humor."
In the paper "Neurocognitive outcome after pediatric epilepsy surgery" by Elisabeth M. S. Sherman, we have some discussion of the effects on children of temporal lobectomy (removal of the temporal lobe of the brain) and hemispherectomy, surgically removing half of their brains to stop seizures. We are told this:
After temporal lobectomy, children show few changes in verbal or nonverbal intelligence....Cognitive levels in many children do not appear to be altered significantly by hemispherectomy. Several researchers have also noted increases in the intellectual functioning of some children following this procedure....Explanations for the lack of decline in intellectual function following hemispherectomy have not been well elucidated.
Referring to a study by Gilliam, the paper states that of 21 children who had parts of their brains removed to treat epilepsy, including 10 who had surgery to remove part of the frontal lobe, "none of the patients with extra-temporal resections had reductions in IQ post-operatively," and that two of the children with frontal lobe resections had "an increase in IQ greater than 10 points following surgery."

See this post for more cases of people whose minds functioned very well despite huge brain damage.  Such cases are powerful evidence against the dogma that our minds are merely a product of our brains.  Repeated countless times in mainstream literature, but never proven, such a dogma is also discredited by both the inability of neuroscience to plausibly account for consciousness and very-long-term human memory, and the inability of a "mind from brain" dogma to account for psychic phenomena such as ESP, remote viewing, and near-death experiences.  Nature never told us that minds come from brains. It was merely neuroscientists who told us that, without having sufficient evidence to support such a claim.  Don't confuse such ideologically-motivated scientist speech customs with facts.

Speaking of widely held dogmas about the mind that are poorly supported by evidence, this recent article discusses how the "chemical imbalances cause depression" idea gained wide acceptance among both the public and professional experts, despite a lack of evidence for it and some powerful evidence against it.  The article says "Despite the lack of evidence, the theory has saturated society."  The article notes that people love these kind of simplistic explanations. The article says of depression, "The theory that it's caused by chemical imbalances is false."

Post-postscript:  There was recently published this case of a man with a 9-centimeter (3 inch) wide "air-filled cavity" in the right frontal lobe of his brain.  Although the paper is entitled "The man that lost (part of) his mind," the paper indicates no sign of mental damage:

An 84-year-old man was referred to the emergency department by his general practitioner having been complaining of recurrent falls and feeling unsteady over several months. He then developed a 3-day history of left-sided arm and leg weakness. There was no confusion, facial weakness, visual or speech disturbance, and he was feeling otherwise well.

The man showed good judgment in declining a risky operation that wasn't vitally necessary. But how could someone have so little damage from a giant hole in a part of the brain that supposedly is involved in language, memory, and judgment? Cases like these are inconsistent with dogmas about minds being generated by brains.

Then there is a case in which a human managed to function well in society as a French civil servant, even though he had almost no functional brain.


The case is discussed here. Inside a normal brain are tiny structures called lateral ventricles that hold brain fluid. In this man's case, the ventricles had swollen up like balloons, until they filled almost all of the man's brain. When the 44-year-old man was a child, doctor's had noticed the swelling, and had tried to treat it. Apparently the swelling had progressed since childhood. The man was left with what the Reuters story calls “little more than a sheet of actual brain tissue.”

But this same man, with almost no functioning brain, had been working as a French civil servant, and had his IQ tested to be 75, higher than that of a mentally retarded person. The Reuters story says: “A man with an unusually tiny brain managed to live an entirely normal life despite his condition, caused by a fluid buildup in his skull.” The case was written up in the British medical journal The Lancet (link).

At this link a neuroscientist states the following:

I have scores of patients who are missing large areas of their brains, yet who have quite good minds. I have a patient born with two-thirds of her brain absent. She’s a normal junior high kid who loves to play soccer. Another patient, missing a similar amount of brain tissue, is an accomplished musician with a master’s degree in English.


At the URL here you can find a book chapter entitled, “Memory
consolidation, retrograde amnesia, and the temporal lobe.” Tables 4 and 5 of this paper give us detailed information on 16 cases of severe brain damage documented in the medical literature. The patients had damage in between three and ten different parts of their brain, with an average of about four or five different brain areas being damaged. The tables give IQ scores for these 16 patients, and the average score was 99 – just one point less than 100, the average IQ. But how could their average intelligence be so normal, if they had such heavy brain damage?