How to Photograph Paranormal Patterns

In this post I will give some basic tips on how to take the most important type of photos you see at this site. I will tell you how you can attempt to take photos of repeating orb patterns. Repeating orb patterns are of great interest when they show very distinctive and highly improbable characteristics repeating very often.  In such cases it can become clear that we are seeing something that cannot be the result of mere coincidental repetitions of random physical characteristics.  When orb patterns appear with a sufficient degree of repetition, and when highly distinctive physical characteristics appear over and over again in the orb photos of a single photographer (the type of repetition that would require a vastly improbable coincidence to occur by chance), then we have what can suggest a manifestation of some unseen purposeful intelligence, something of very high philosophical and spiritual importance.

I have photographed a vast number of such orb pattern repetitions, which you can see here, here and here and by looking at the videos and photo slide shows here (one of which is two hours long). But in order for the world to pay proper attention to this important observational phenomenon, it will be very helpful if more photographers get such orb pattern repetitions and report their findings.  Below I discuss two methods you can use to  attempt to photograph repeating orb patterns.

Method 1: Attempting to Get Photos of Orb Patterns Appearing in Clean Dry Air

The most basic type of orb photography involves photographing in clean dry air, using no special technique, without having your camera on a platform.  For such basic orb photography, all you need is a regular point-and-click camera with a flash. A $100 camera will work just fine. For this type of photography, I use a Sony DSC-W830 camera. I have no reason to doubt that other cameras in the same price range will work just as well.


I can give the following general principles about basic orb photography:
If you have not been able to get any orbs in your photos, I do not recommend that you spend more than 10 minutes a day trying to get such orbs. Just be patient. Try taking about 20 flash photos a day, ideally while thinking to yourself that you would like to get something you have never seen before. Persist at this activity for several weeks if you have no success.

Such a rather slow rate of pattern repetition is typical when I photograph in clean dry air, not photographing falling water drops. I will almost never get two instances of an orb pattern appearing in a single day when I am not photographing falling water drops.  So if you get photos of orbs with distinctive characteristics, it is very important for you to save such photos, so that you can compare them with newer photos, looking for pattern repetitions.  If you have a computer, you can keep all of your photos of orbs with distinctive characteristics in a single folder or directory. Then if you get a new pattern showing an orb with a distinctive characteristic, you can compare the new photo to your old orb photos, looking for a pattern repetition.

If you get a good pattern repetition, try to publish online side-by-side photos that allow people to see the similarity. Below is an example. 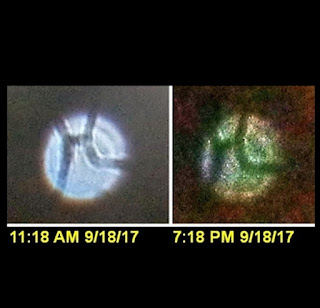 Using various tools that allow you to combine two or more photos into a grid, you can also create a grid like the one below, which can be useful to display any pattern you may have photographed more than twice: 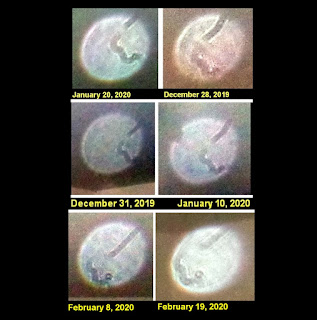 Below is another example showing a "leaping dancer" pattern that repeated the next day: 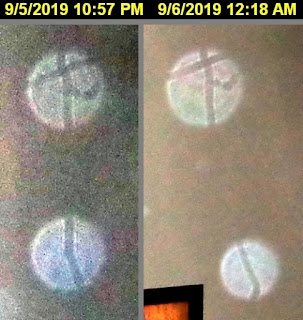 There is another technique for trying to get photos of orb patterns: the technique of trying to get such patterns while photographing falling water drops. I have had enormous luck at such a thing, as you can see by looking at the photo summary posts here and here.

As I am just a run-of-the-mill type of guy no different from the average fellow, I know of no reason why other people should not be able to take astonishing water drop photos of the type I show on this blog. Below is a description of the technique you can use to try and get repeating orb patterns while photographing falling water drops. 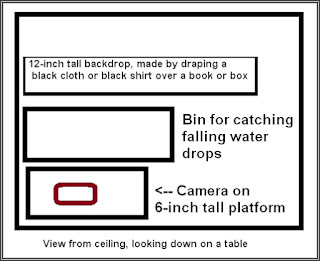 With some luck and persistence, you may find yourself getting startling photos like the one below. 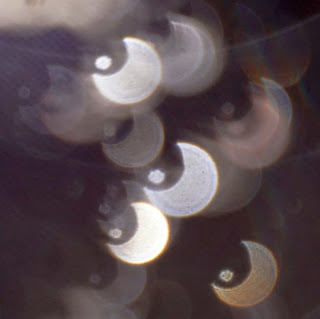 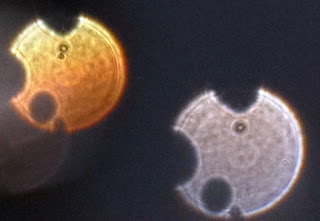 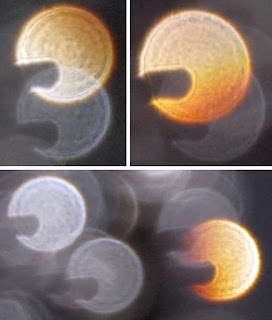 Or something as colorful and startling as what we see below: 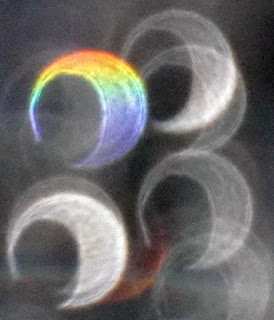 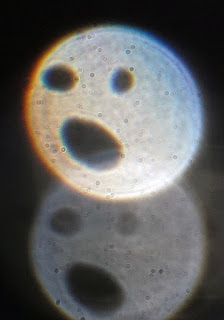 A somewhat simplified way of doing the technique described above is to carefully watch your viewfinder as you photograph, and see whether you see any recurring anomaly. If you do not notice any recurring anomaly, do not bother to transfer the photos to your computer, and just delete the whole batch of photos you took during that photo session.  I use such a simplified method when taking photos of falling water drops. If I failed to notice a repeating pattern appearing in my camera viewfinder as I photographed falling water drops,  I will just delete the whole set of photos I took in a photo session,  without bothering to transfer the photos to my computer.

I usually get some anomaly I cannot explain after taking about 5,000 photos of falling water drops, and I very often get results that seem worthy of publication after taking that many photos. But it is not very uncommon for me to take 10,000 or more consecutive photos (perhaps spread over two days) without getting any results I wish to publish on this blog.  So if you are interested in trying to photograph repeating orb patterns, don't give up after taking only 1000 or 2000 photos.  Wait until you've taken 15,000 or 20,000 photos before abandoning this activity because of a lack of success.  It will help if you have a camera that works in "burst" mode or "sports" mode, allowing you to take multiple photos with a single press of the shutter button.


If your attempt to photograph anomalies fails, you can try switching to a different camera. My inexpensive old Olympus FE-100  produced water drop photos showing certain types of anomalies such as striped orbs and orb crescents. But for a long time such effects would never appear using my Sony A6000 camera. However that camera would occasionally produce abundantly other types of anomalies such as orbs with holes.   Experimenting with a few digital cameras might increase your chance of success.

I do not recommend purchasing an expensive camera for the photography of falling water drops, unless you have got some interesting results with a less expensive camera.  If you start to get interesting results with a point-and-click camera, and you want to move up to a high-quality camera like the ones I have used for my best photos of repeating orb motifs appearing during water drop photography, I recommend the Sony A6100 camera, with the HVL-F20M flash attachment. 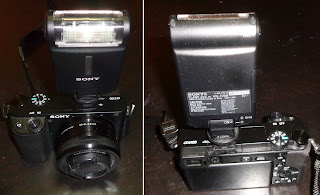 The Sony A6100 with the HVL-F20M flash attachment

You really should avoid the Sony A5000, because its built-in flash may fail, leaving you without any ability to do the type of photography described here (since the Sony A5000 has no "flash shoe" allowing a flash attachment to be added).  But the Sony A6000 and the Sony A6100 have a "flash shoe" unit, allowing you to plug in the HVL-F20M flash attachment if the built-in flash fails.  Since I have experienced a catastrophic failure (after long use) that effectively caused my Sony A6000 to stop working, I cannot recommend that camera. But for the past several months, I have been putting the Sony A6100 camera (with the HVL-F20M flash attachment) to a real workout, taking 5000+ photos a day.  This combo has worked beautifully for me for several months. I have no complaints about the Sony A6100, and I recommend it as an excellent camera that can be a real "workhorse."

If you don't get anything very interesting in your photos after a few attempts, keep trying. I get the stranger photographic anomalies in only a minority of the times I try to photograph water drops. Probably 70% of my photographic sessions do not produce content I publish on this blog.  Persistence is the number one attribute required for success in photography of the mysterious or paranormal.

The phenomenon I get at unpredictable intervals when photographing falling water drops is a massive repetition of patterns, with many instances of a pattern repetition occurring in a single day.  If this happens to you, it will be a different situation than the one I previously described when discussing photos you can take standing up in clean dry air.  If you get the type of thing I get, there will be no need for you to compare your water drop photos of one day with photos you took another day to find pattern repetitions.  If you get the type of thing I get, you will see a massive and very obvious pattern repetition that occurs in a single photo session occurring on a single day.

When examining photos you took of falling water drops, do not spend time squinting at small photo details looking for some subtle orb pattern repetition that is not easily noticeable.  Whenever I have got orb pattern repetitions when photographing falling water drops, the pattern was as "plain as the nose on my face" -- something that was very obvious and noticeable, the type of thing that almost anyone would have noticed when looking at the photos.

If you get interesting  repeating orb patterns, it is very important that you publish your results somewhere online. Also, please email me at marjinsopmar@gmail.com, giving me the URL where you have published your interesting results. Just as it is important to not throw away very high scores on ESP tests, but to publish such results, it is very important that any photographer publish his or her anomalous results if he or she photographs a very high degree of orb pattern repetition that is very hard or impossible to explain.

If you fail to get any interesting results after many photo sessions lasting a total of 10+ hours, I am interested in learning about such negative results, so drop me an email to tell me about such a lack of success if it occurs.

What Are Your Chances of Success?

Postscript: By August 2020 I have experienced two different unrecoverable failures of the Sony A6100 camera, requiring me to buy the camera three different times during a period of 9 months.  The failures each occurred after months of heavy-duty use (consisting of 6000+ photos per day). I can no longer give a very strong endorsement for this camera model. Put me down now merely as someone who loves the Sony A6100 except when it suddenly stops working.

The following are settings that you can use with the Sony A6100 to do the type of photography described above. Some of these settings facilitate the taking of thousands of photos in a single 1-hour sesssion:

When doing photography of falling water drops with the Sony A6100, you should use a Drive Mode of Continuous Shooting: Hi+ (note the plus sign),  an Image Quality of Standard, and an image size of only 6 megabytes, all of which seems to allow more photos to be taken in a shorter space of time.

The photo below shows the Sony A6100 while it was set to the settings given above: 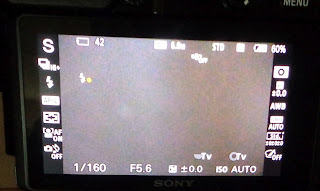 The photo below shows the Shoot Mode screen set to settings that I use with the Sony A6100 when photographing falling water drops. You can get this screen by pressing the round Fn button on the lower right of the camera.

Below we see a type of water container that I use when doing this type of photography.  You can obtain such a container by buying several types of spices, and cleaning out one of the containers. 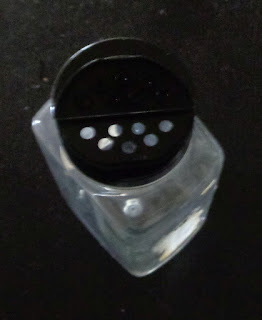