At a time in which people are suddenly noticing that revered authorities have been massively lying to us for a very long time about Afghanistan, it may be appropriate to look at other areas in which authorities have long misspoken. Professors who have a limited and philosophically irrelevant field of study such as virology or stellar astronomy or ancient history tend to be people of good honesty.  But then there are what we may call the "Grand Explanation" professors, dedicated to promoting some "grand explanation" about the fundamental nature of life, mind or the universe.

"Grand Explanation" professors include the following:

Very many "Grand Explanation" professors have a long history of making misleading statements and carrying on deceptive practices. Below are some of the items in that history (you can read here for an explanation of some of these assertions):

Given the things listed above, it is no surprise that there is a huge  scientific research problem called the “replication crisis.” This is the problem that a large fraction of research studies cannot be replicated. The problem was highlighted in a widely cited 2005 paper by John Ioannidis entitled, “Why Most Published Research Findings Are False.”  An article in Science magazine has the title "Rigorous replication effort succeeds for just two of five cancer papers." The paper says, "The cancer biology project was inspired by reports from two companies that when they tried to follow up on dozens of papers pointing to potential new drugs, they could not replicate as many as 89% of the studies." Although it is sometimes described as a mere  "psychology replication crisis," the poor replication rates are just as bad in neuroscience and evolution research as in psychology. Referring to the fMRI brain scan studies that are a staple of experimental neuroscience, a paper states, "Low sample sizes, low power, and low effect-sizes, which reduce replicability, have been generally reported in the field of fMRI research." A paper found that evolution and ecology research is plagued by the same Questionable Research Practices leading to low replication rates in psychology and neuroscience.
A common characteristic of "Grand Explanation" professors is their failure to study large bodies of evidence very relevant to whether their "grand insights" are correct.  For example,such professors fail to seriously study reports of anomalous mental and spiritual phenomena, with 99% of such professors failing to read even 1% of the books and the journal volumes they should read presenting direct observational reports of such phenomena.  What's going on is a very dysfunctional "don't read reports that contradict my grand explanations" tendency.

Overall, there is a kind of spiral of degeneration occurring in the activity and speech of "Grand Explanation" professors. As more and more evidence accumulates that we do not live in the kind of universe depicted by such scientists, and that reality does not work the way they claim, and that our bodies and minds did not arise by things discussed in their "Grand Explanations,"  the actions of the "Grand Explanation" professors grow more and more desperate.  Some of them resort to desperate measures such as asserting an infinity or near-infinity of other universes, or telling us tall tales about monkeys rafting across the Atlantic ocean millions of years ago, or claiming that random mutations accidentally produced things more organized than anything humans have ever designed, or making morally destructive claims that consciousness or freedom of action is an illusion, or claiming that previously unimagined cellular complexity originated by lucky ingestion, or making laughable claims that fatty bubbles help explain the origin of microscopic life, or claiming that clumping algae cells help explain the origin of macroscopic life. This is the phenomenon of "escalation of commitment," where someone makes bigger and bigger investments into some activity or ideology, despite increasing signs that it was a mistake to have ever invested in that activity or believed in that ideology. 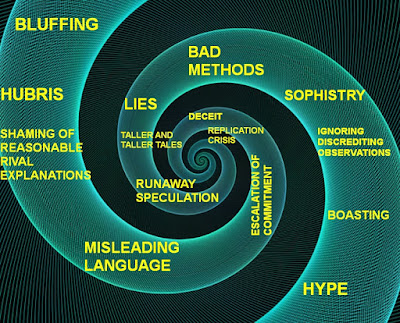 Why is there so much deceptive behavior going on among "Grand Explanation" professors?  I can give two general reasons. The first is that committing yourself to a particular Grand Explanation is  something that tends to make a person prone to start speaking incorrectly. Once a professor has committed himself to his Grand Explanation, he may have a strong tendency to always make whatever statements support his Grand Explanation. Facts will be twisted; misleading language will be used; data will be cherry-picked; the most enormous improbabilities will be ignored;  disconfirming evidence will go unstudied and ignored; things will be described with utterly misleading metaphors; taller-and-taller tall tales will be conjured up to try to explain away inconvenient facts; mere molehills of evidence will be described as if they were mountains; mountains of disconfirming evidence will be ignored or effectively declared as taboo; reasonable and honest critics will be besmirched or belittled or libeled. Eager for evidence in support of his Grand Explanation, a professor may also adopt bad experimental procedures that may tend to produce misleading results superficially supporting such an explanation.

Oh, what a tangled web we weave

When first we "grand insight" believe

The second general reason for the degenerative spiral of "Grand Explanation" academia has to do with the widespread dysfunction in today's scientific academia. What we have is a system whereby various players are strongly incentivized to act in a corrupt or dysfunctional manner for self-serving reasons.  Specifically:

What we have here is a largely corrupt system in which various parties (professors, colleges, universities, science journalists, corporations, "science news" sources, science paper publishers and book publishers) are financially motivated to produce or promote misleading but impressive-sounding content. There are "perverse incentives" all over the place, leading to an abundance of erroneous claims.   A 2017 scientific paper stated, "we will ...describe how perverse incentives and hypercompetition are altering academic behavior of researchers and universities, reducing scientific progress and increasing unethical actions." The same paper has a section title of "Perverse Incentives in Research Academia: The New Normal?"

A 2016 scientific paper is entitled "Current Incentives for Scientists Lead to Underpowered Studies with Erroneous Conclusions."  Below is a quote (I'll omit the reference numbers in the original text):

"Current incentive structures in science, combined with existing conventions such as a significance level of 5%, encourage rational scientists to adopt a research strategy that is to the detriment of the advancement of scientific knowledge. Given finite resources, the importance placed on novel findings, and the emphasis on a relatively small number of publications, scientists wishing to accelerate their career progression should conduct a large number of exploratory studies, each of which will have low statistical power. Since the conclusions of underpowered studies are highly likely to be erroneous, this means that most published findings are likely to be false. The results of our model support this conclusion. Indeed, given evidence that with sufficient analytical flexibility (known as p-hacking) almost any dataset can produce a statistically significant (and therefore publishable) finding, our results are likely to be conservative...Ioannidis concluded—on the basis of simulations of the impact of varying types of bias—that most published research findings are false. Button and colleagues showed that the average statistical power of studies in neuroscience is likely to be very low, and there is evidence that this problem exists across different domains of biomedical science. Recently, the Open Science Collaboration reported that of 100 psychology studies selected from leading journals, only a minority of findings (approximately 40%) could be replicated."

Because of problems like the ones just mentioned, the world of the "Grand Explanation" professors is often rather like an athletic league in which the players are taking bribes to perform poorly in certain games -- not through direct cash payments but through various indirect incentives that make the bribery not so noticeable.  A professor and a PhD candidate write the following:

"The steady growth of perverse incentives, and their instrumental role in faculty research, hiring and promotion practices, amounts to a systemic dysfunction endangering scientific integrity. There is growing evidence that today’s research publications too frequently suffer from lack of replicability, rely on biased data-sets, apply low or sub-standard statistical methods, fail to guard against researcher biases, and overhype their findings. In other words, an overemphasis on quantity versus quality. It is therefore not surprising that scrutiny has revealed a troubling level of unethical activity, outright faking of peer review, and retractions. The Economist recently highlighted the prevalence of shoddy and non-reproducible modern scientific research and its high financial cost to society. They strongly suggested that modern science is untrustworthy and in need of reform."

The behavior of very many "Grand Explanation" professors is a huge betrayal of trust. Many millions have placed their trust in professors, anointing them as their primary guides to understanding reality.  With such great trust comes an expectation of extremely upright and first-class behavior. But again and again professors have betrayed such trust, by failing to act according to proper principles of honesty and candor, and acting as if their chief interest was in promoting their own prestige and career advancement, their own belief systems, and the vested interests of themselves and their colleagues. Many millions who decided that professors should be their compasses are being pointed in the wrong direction by professors who act like broken compasses.

There is a way out of the degenerative spiral of overconfident "grand explanation" science-flavored ideology.  The way out is a path that can be called rollback and reform.

In the software industry the term "rollback" is used to mean when a version of a software is withdrawn because of errors in it.  We can use the word "rollback" in a scientific context to mean a case of retracting some explanatory claim and reverting to a state of saying that the cause of something is unknown.  Although scientific academia rarely does rollbacks, they sometimes occur. Some examples are below:

"Grading their own term papers," our "Grand Explanation" professors have sewed on their own shirts many a self-devised merit badge they did not deserve.  They have adorned their mantles with self-devised trophies, by prematurely declaring without warrant that they understand great mysteries a thousand miles over their heads such as the origin of mind, the origin of major biological innovations and the origin of humans. Scientists should do a rollback of such vastly overconfident and never-warranted claims.  Rather than replacing their faulty "grand explanations" with some other explanation, their first step should be to simply revert to a state of very humbly saying "we don't know the answers to most of the biggest origins questions." Replacing hubris with humility, they should stop pretending to understand so many big things they don't understand.  Along with a rollback of unwarranted and failing "grand explanations," there should occur a reformation of the faulty academia practices and perverse incentives which helped to cause such poor explanations to sit on thrones for such a long time.