They Too Were "Ghost-Told" of a Death

In the posts below I have described about 200 cases of people who reported seeing an apparition of someone who had died, but whose death was unknown to the person seeing the apparition:

Even More Cases of Veridical Apparitions

When Apparitions Serve as Announcements

When Apparitions Act as News Bulletins

Below are some additional cases of this type.

In the book More Glimpses of the World Unseen by Frederick George Lee, we have this account on pages 142-143:

"Just as I turned towards the summer-house, I saw my wife's brother standing within the door of it. He looked hard at me, but did not speak. I looked hard at him, wondering why he had not gone straight to the house, and then went up and shook him by the hand. I grasped at what seemed to be his hand, but found myself holding nothing ; and in a few seconds, not more than twenty, he appeared to have altogether vanished... Two days afterwards, I found that he had died suddenly of heart-disease while on a tour in France, about the time that I had seen his spirit ; and I learnt this by a letter from his widow, which reached me by the second post of the Monday following the Saturday upon which he had died."

On page 482 of Volume 18 of the Journal of the American Society for Psychical Research, we have an account by Alice Davidson Baxter that she saw an apparition of her soldier brother:

"There , in full view, stood my brother, Lieutenant Joseph M . Davidson. He gazed at me for a second or two , and disappeared. I saw the upper portion of his body perfectly , and he looked at me sorrowfully and earnestly ....On the night of November 26th, say three weeks later, my father was advised by the War Department that our boy had been killed in action on the 6th of November. I said “ No , it was on the 4th ,' and when asked my reasons for doubting the accuracy of the Department telegram, I related the incident of the night of the 4th."

Alice's father corroborates this account, and says, "Later telegrams , confirming the death of our son, gave the date, November 4th."

In his long fascinating book Ghosts: True Encounters with the World Beyond by Hans Holzer, we read the following account of someone learning of a death from an apparition:

“On November 15, 1971, at about 6:30 A.M., I was beginning to awaken when I clearly saw the face of my cousin beside and near the foot of my bed. He said, ‘Don, I have died.’ Then his face disappeared, but the voice was definitely his own distinctive voice. As far as I knew at that time, he was alive and well. The thought of telling my wife made me feel uncomfortable, so I did not tell her of the incident. At 1 1:00 A.M. , about four- and- a-half hours after
my psychic experience, the mail arrived. In it was a letter from my cousin’s widow, informing us that he had a heart failure and was pronounced dead upon arrival at the hospital. She stated that his death occurred at 9:30 P.M., November 8, 1971, at Ventura, California."

In the fascinating book Noted Witnesses for Psychic Occurrences by Walter Franklin Prince, we have on page 204 an account by the Duchess d'Abrantes, the wife of General Junot, one of Napoleon's generals. She says she saw at length an apparition of her husband, who had "departed for Illyria." She says "one of his legs was broken." She says "the apparition slowly faded, and became like an almost invisible mist." General Junot had at about the same time (after reverses of fortune) jumped out a window, an apparent suicide attempt that resulted in a broken leg and his death several days later.

On pages 262-263 of the same book, we are told about an apparition sighting by Celestine Galli-Marie, who first sang the role of Carmen, known to almost every opera lover.   While on stage, she stopped singing, and felt a terrible pain. In the dressing room later, she said, "Some misfortune has happened to our Bizet," and "As the blow seemed to strike me, I saw his face in front of me,  for just a second." She soon learned that the person she referred to (Georges Bizet, the composer of the opera Carmen) had perished at about the same time, by a very surprising death by heart attack at the age of only 36. 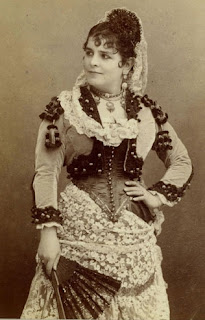 In the book Posthumous Humanity: A Study of Phantoms we read this account:

"M. Bonnetty, responsible editor of the Annates de Philosophie Religieuse, tells us that one evening, before sleeping, he saw the image of one of his friends, then in America, open his bed
curtains and inform him that he had that instant died. The sad news is subsequently confirmed, and indicates that very moment as having been the last. But this image wore a waistcoat whose very extraordinary pattern had much struck M. Bonnetty ; he made subsequent inquiries, and begged that they would send him a drawing of this waistcoat pattern. They did so, and it was identically that of the apparition."

On page 128 of the March 1860 edition of The Spiritual Magazine, we read of a Miss S. H. who on a Friday evening stated the following: "I have seen my poor dear Rosa; I little thought she would go away first when she came to see me before I left home; now she has gone from us all, and two bright angels are taking her to that beautiful place that I can’t get into." It was later found that the same Rosa had died that Friday afternoon.

In the Psi Encyclopedia, we read this account about a Soviet researcher who apparently received very many reports of partial apparitions coinciding with a time of death at a distant location:

"In an interview in Komsomolskaya Pravda a year before his death, Vasiliev revealed that he had received ‘hundreds or more’ accounts such as one in which a woman described a vivid hallucination of her son’s face later found to coincide with the moment of his death. ‘How’, he asked, ‘can we explain the fact that such weak currents as those of a man’s brain can give rise to directed electromagnetic capable of being transmitted tens, hundreds, even thousands of kilometers?’ "

In the book New Evidences of Psychical Research we read of a Mrs. Napier who was surprised to see an apparition of someone named Anthony Grace, who she had known long ago. She later found out that this person died in August 1906, the same month the apparition was seen.

On page 213 of Volume X of the Proceedings of the Society for Psychical Research we read the following account:

"We went to a cottage in Gloucestershire, where my sister and I shared the same room...As my sister and I were working and talking together, I looked up, and saw our young acquaintance standing in front of me and looking at us. I turned to my sister, she saw nothing ; I looked again to where he stood, he had vanished. We agreed not to tell anyone — and, although I wished to put it down in my diary (which I bad not kept for some time), I was afraid to do so ; I therefore made marks to remind myself. Some time afterwards we heard that our young acquaintance had either committed suicide or had been killed ; he was found dead in the woods twenty-foar hours after landing. On looking back to my diary, 1 found that my marks corresponded to the time of his death."

On page 50 of Volume II of Phantasms of the Living by Gurney, Myers and Podmore, we read the following account:

"On February 26, 1850, I was awake, for I was to go to my sister-in-law, at Kingstown, and visiting was then an event to me. About 2 o'clock in the morning my brother walked into our room (my sister's) and stood beside my bed...He looked down most lovingly and kindly, and waved his hand and he was gone. I recollect it all as if it were only last night it all occurred, and my feeling of astonishment, not at his coming into the room at all, but at where he could have gone. At that hour he died."

Postscript: A person stated that he heard an account of an apparition sighting from a Justice of the Supreme Court of the State of New York. He tells the account as follows:

"That on one occasion he was coming down the Hudson River from Albany in a night boat, being the sole occupant of a stateroom. That  some time in the night, he awoke and saw the form of the lady robed in white with whom he had boarded when reading law. That she was standing near his berth, and said to him : 'I have just died, and thought I would come and tell you.'  She then disappeared; whereupon he arose, procured a light, and made a note of the occurrence and of the exact time. That soon after reaching home that day a telegram was received, announcing the death of the lady, and that subsequently he ascertained that it had occurred at the exact time that she had appeared to him on the boat."
View on Mobile