To Launch Their Legend, All They Needed Was a Scientist and a Slogan

In the middle of the nineteenth century, many a scientist wished that there was some natural explanation for biological origins, a story that could be told as an alternative to religious explanations. But at that time scientists were in very bad shape in regard to having anything allowing them to get started on such a thing. Nature did not seem to offer any hint of how things like lions and tigers and humans could have naturally originated.

But at that time there was something which was like a gigantic springboard ready to launch some theory of natural biological origins that might have been proposed, ensuring its cultural success. That springboard was the social structure of academia. Just as the social structure of medieval churches served as a huge springboard that helped many a legend go viral (such as legends of the healing powers of saint bones), the social structure of universities and colleges stood ready to make a natural theory of biological origins go viral. Once an idea starts being spread about by the professors at ten or twenty top universities, the idea has a good chance of eventually infecting the masses, even if the idea is very poorly substantiated. Once a bandwagon effect gets rolling to spread some idea in a process of social contagion, and an academia herd effect comes into play, some flimsy claim can become a societal norm, a speech custom that all compliant students are expected to mouth.

We know which theory of natural biological origins got the launch of academia's springboard: Darwin's theory of evolution. It is interesting to speculate on what would have happened if Darwin had never lived. What story of origins would academia have told in such a case?

There is no reason to suppose that some theory of evolution by natural selection would have become very popular if Darwin had never lived. Nature never does anything to plant in our minds the idea of natural selection, and no one one ever directly observes such a thing in the way we observe hurricanes, rainfall, animal births and other natural phenomena that can be recorded as having happened on a particular day. Unconscious nature does not ever do anything that is actually an act of selection, because selection (also called “choice”) is an act done only by conscious agents. No visible things we can see with our eyes force upon us the idea of natural selection. So if there had been no Darwin, the phrase “natural selection” would probably not have become popular.

But we can speculate about how other ideas of natural biological origins might have arisen in a world in which Darwin had not been born. For example, I can imagine a scientist named Anderson writing a book entitled On the Origin of Species by Means of Various Complex Factors. But such a book would probably not have been very successful. It would have lacked one of the two essential ingredients for a theory of natural biological origins to go viral: a scientist and a slogan.

Within the halls of academia there existed a large group of people extremely eager to popularize some theory of natural biological origins as soon as it appeared. We may call these people the yearning-to-say-we-got-this guys. “We got this” is a phrase people say when they think they have something under control or when they think they understand some thing. The yearning-to-say-we-got-this guys included people in academia who hungered for some theory of natural biological origins which would feather their caps and enhance their prestige: a set of professors yearning to crown themselves with glory by positioning themselves as sages who understood the great secret of biological origins. Of course, if you are a professor of biology or a professor of natural history, you will seem like a vastly more impressive person if you can convince people that you understand the deep mystery of the origin of species and the origin of humanity. Some professor saying "I understand how mankind originated" sounds like a far more impressive figure than some professor humbly saying, "Such a mystery is a hundred miles over my head." The yearning-to-say-we-got-this guys also included many inside and outside of academia who desired some theory of accidental origins that would fit in with their belief in the nonexistence of any power greater than man.  An atheist wants a theory of natural biological origins more than a young boy wants a Playstation or Xbox machine under his Christmas tree.

For such people to propel some theory of natural biological origins, all they needed was to start endlessly repeating some statement with the following form:

What was needed at the end of this statement was some kind of slogan or catchphrase that could be offered to the public as some simple explanation for the natural origin of species such as mankind. It would not have worked for the yearning-to-say-we-got-this guys to start making this claim over and over again:

“The scientist Anderson explained that the origin of man and other species occurred because of various complex factors.”

This would not have worked, because “various complex factors” is not a good slogan or catchphrase. So Anderson would never have been put on Darwin's pedestal.

Let's imagine a different possibility. If Darwin had never lived, there might have been a physicist named Dumont who might have written a book called On the Origin of Species by Means of Stochastic Differentials, Or How Luckier Luck Yielded Mankind. Impressing us with lots of complicated equations and abstruse mathematics, such a person might have tried to sell the idea that incredibly complex organizations of matter occurred not just because of luck, but because of luckier luck, such differences in luck occurring because of “stochastic differentials,” a fancy term meaning “differences in luck.”

There would have been little substance in such reasoning, because the idea of “luckier luck” doesn't really mean anything more than the idea of luck. But we can imagine that this Dumont might have been placed on the pedestal of Darwin. With such a book, the yearning-to-say-we-got-this guys would have had the two essential things they needed to launch the legend that the origin of species had been explained: a scientist and a slogan. It is all too easy to imagine a situation arising in which people in academia would have begun endlessly repeating statements like this:

“Professors agree that the origin of mankind and other species were all explained by the scientist Dumont, who had the brilliant insight that such things arose merely because of luckier luck, the type of luckier luck that comes with stochastic differentials.”

We can also easily imagine that the dense mathematics of Dumont's book would be frequently cited as “mathematical proof” that mankind had arisen purely because of “luckier luck.”

Let's imagine a different possibility. If Darwin had never lived, there might have been a chemist named Evert who might have written a book called On the Origin of Species by Means of Advantageous Adhesion, Or How Constructive Clumping Yielded Mankind. Impressing us with knowledge of chemistry and chemical bonds, such a person might have tried to sell the idea that incredibly complex organizations of matter occurred merely because of things clumping together, or adhesion (a fancy term that simply means things sticking together).

There would have been little substance in such reasoning, because the idea of “advantageous adhesion” or “constructive clumping” doesn't really mean anything more than the idea of lucky stickiness. But we can imagine that this Evert might have been placed on the pedestal of Darwin. With such a book, the yearning-to-say-we-got-this guys would have had the two essential things they needed to launch the legend that the origin of species had been explained: a scientist and a slogan. It is all too easy to imagine a situation arising in which people in academia would have started to endlessly repeat statements like this:

“People used to think that maybe there was design involved in living things. But then the scientist Evert naturally explained the origin of animal species and mankind, with his brilliant insight that such things arose merely because of advantageous adhesion and constructive clumping.”

But no such alternate histories happened. There was no such Dumont or Evert who got their ideas launched from the huge springboard that is academia. It was Charles Darwin whose ideas went viral because of the huge academia springboard of the yearning-to-say-we-got-this guys. In some ways Darwin was an unsuitable candidate for such treatment. Unlike the Dumont I imagined, Darwin had very little interest or ability in mathematics, meaning he was entirely unqualified to be judging that things of vast mathematical improbability had occurred. Unlike the Evert I imagined, Darwin seemed to have very little interest in chemistry or knowledge of chemistry, making his musings rather laughable as explanations for the vast intricacy and enormous functional complexity of the fine-tuned biochemistry in living organisms, complexity almost totally unknown to anyone in Darwin's time. You can see a little bit of such complexity here.

While it would not have been literally inaccurate or misleading to have used a slogan of “luckier luck” or “advantageous adhesion,” it was literally inaccurate and misleading to have used a slogan of “natural selection.” For selection (also called "choice") is something only done by conscious agents, and Darwin did not at all believe that nature literally selects things, or that nature is conscious. Darwin confessed in 1859 that "in the literal sense of the word, no doubt, natural selection is a false term." Also, the idea of trying to explain incredibly fine-tuned and enormously organized arrangements of matter in organisms by referring to “natural selection” made no sense, because this “natural selection” was a mere filter effect rather than an organization effect or a creative effect.  As the leading botanist Hugo de Vries stated:

In his books that consisted largely of armchair reasoning, Darwin produced no evidence or data that anything had originated by his cherished notion of "natural selection."  Darwin's attempt at an explanation for the origin of living things was extremely inadequate,  but it sometimes happens in life that extremely inadequate work is good enough. And so it was with Darwin's attempt to provide a natural explanation for the origin of living things. Once his books were published, the yearning-to-say-we-got-this guys had the only two things they needed to launch a legend: a scientist and a slogan.

Although it was both misleading and of very little value from an explanatory standpoint, the slogan “natural selection” had the all-important virtue of being an infectious catchphrase. And so the viral particles of Darwinism were propelled forward by the vast springboard and legend-propagation-engine that is academia. Darwin was put on the Darwin pedestal, and the yearning-to-say-we-got-this guys got busy spreading the achievement legend that biological origins had been naturally explained.  The yearning-to-crown-themselves-with-glory professors did just that, by selling themselves as people who had mastered the supreme question of biology.

The bandwagon effect got rolling in a process of social contagion which reached its climax when belief in the achievement legend became a required academia norm, a sacred article of faith that could be defied only by those willing to be scorned as heretics. After the achievement legend became a compulsory tenet of academia's belief community, a mandatory shibboleth in a conformist catechism, the yearning-to-say-we-got-this guys had something that sways the millions just as well as good evidence: a huge echo chamber in which the slogan could be chiseled into the minds of the masses by endless repetition.    In the Soviet Union a rather similar sociocultural engine of triumphalist  narration sold through endless repetition the achievement legend that Vladimir Lenin had established a worker's paradise, a legend that persisted for more than half a century. 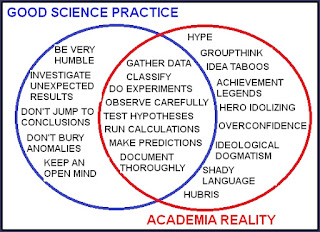