We have long been socially conditioned to accept as gospel truth any statements that scientists keep making again and again. We should not be following such a thought habit, because some of the assertions that scientists keep repeating over and over again are little more than speech customs of a particular belief community, rather than things that have been established by observations or experiments.

One claim that scientists keep repeating with great confidence is a claim about the age of the universe. We are told repeatedly that the universe is 13 billion years old.  But there are reasons why such claims cannot be made with very much confidence.

Claims about the age of the universe are based on the Big Bang theory. But that theory has not been conclusively proven. One problem is that we can never observe the Big Bang, nor can we even observe the universe at any state within 300,000 years after the Big Bang. Our cosmologists tell us that for its first 300,000 years, the universe was so dense that all light photons were scattered and shuffled every minute. Only when this scattering of light photons ended, at a time called the recombination era, was it possible for light photons to start traveling without being hopelessly scattered. We are told that because of this scattering, it will always be physically impossible to observe what was happening during the first 300,000 years of the universe's history. But this means we can never have the direct observation of the Big Bang (or even very dense universe conditions) that we would need to have in order to be completely confident that the Big Bang theory is correct.

Philosophers of science refer to the underdetermination of theory by data. When data does not prove that a theory is true, and does not rule out possible rival theories that can equally well explain observations (called empirical equivalents), such a theory is said to be underdetermined. There is a serious question as to whether the Big Bang theory is doomed to be a permanently underdetermined theory, because of the impossibility of directly observing the first 300,000 years of the universe's history.

What is very interesting is that such chains of reasoning depend crucially on a "assume that the physical rates have not changed" principle, but such a principle is not at all consistently followed by modern cosmologists, the scientists who study the universe as a whole.  Most modern cosmologists seem to believe in a cosmic inflation theory which tells us that the expansion rate of the universe has undergone the most drastic change, changing from an exponential rate at the beginning to a enormously lower linear rate after the universe's first instants.  So while the whole chain of reasoning used to establish a universe age of billions of years depends crucially on a "assume the physical rates have not changed" principle, such a principle is violated in the most spectacular manner by cosmologists, who postulate pretty much the most dramatic change imaginable in the universe's expansion rate.  If the universe's expansion rate changed so dramatically near the time of the Big Bang, why should we have any confidence that there have not been other changes in that rate, and in other physical rates such as radioactive decay rates? If either thing has occurred, we can have little confidence in current estimates of the age of the universe and the age of the Earth.

There is another reason why we do not know for sure the age of our universe. One is that if the universe was deliberately created, then we absolutely cannot tell whether it is actually billions of years old or even older than a million years.  Our universe could have been created much more recently -- in fact, at any arbitrary point in the past.

There is a line of reasoning that could be used to support belief in a universe 13 billion years old, regardless of whether it was divinely created. The argument would go something like this:

This argument is not particularly compelling. It seems quite possible that a universe might be created that is younger than it might appear to be under certain calculations. I can give an example helping to support this idea.

Let us imagine a very simple creation scenario. Imagine a deity creates a very simple one-planet universe. The planet has nice grass, very tall trees, mountains and oceans. There is a sun in the sky that provides light. When people on this planet look up at the sky, they see a lovely star-filled sky, with some beautiful astronomical sights. The planet has various types of stones and rocks, including lots of attractive marble rocks. The deity creates a race of people to live on the planet.

If we followed such reasoning to its reductio ad absurdum, we might conclude that any honest deity would only create an environment in which every newly created thing looked like it was newly created – and that the entirely newly created planet would therefore be made of gleaming plastic and shiny stainless steel.

But there seems something very wrong with this whole line of reasoning. It does not actually seem to be a real moral principle that honest minds never create things that look much older than they are. For example, you might study the techniques of the French Impressionists, and create some paintings in their style. If you hung such paintings in your home, someone might think that they are very old paintings dating from the time of Renoir and Monet. But you have not done anything dishonest by creating these paintings. Or, you might have a new house built in the Colonial style popular at America's birth, but you are not some deceiver because many might think the house is older than it is.

We really don't have any sound basis for concluding that a created universe would be as old as it appears to be according to certain lines of scientific reasoning. If our universe was created, it could be 13 billion years old, one billion years old, 10 million years old, or only 1,000 years old. A universe could be created in any state of complexity or any state of motion. A freshly created universe might either have some “spanking new” look, or it might appear to be something much older. The fact that we may find fossils that we can radioactively date to millions of years ago does not necessarily  mean that corresponding organisms lived millions of years ago. Such items might be kind of just part of interesting details added to a universe created much more recently. 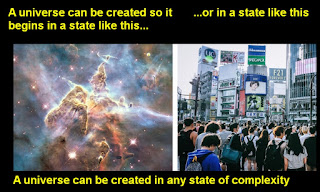 Because of such a possibility, we cannot at all be certain of how old the human species is. Mankind could be 40,000 years old, or 10,000 years old, or 1000 years old, or only 100 years old.  For example, the universe could have started out in the state that it was in on the instant of 12:00 AM EST on January 1, 2019.  Such a creation could have included a very complex planet Earth packed with living things, buildings, technology, moving cars, flying planes and humans with minds already filled with memories.

The possibility that the human race is much younger than we think is a very interesting possibility relevant to discussions of whether a deity might have permitted the amount of suffering that seems to have occurred on our planet.  History books tell us of enormous human suffering that occurred between 3000 B.C and 2000 AD, but philosophically we cannot be sure that all of this suffering actually did occur.  As I just mentioned, the universe could have been divinely created so that its first moment was a state of very high complexity and order, such as the state the universe was in at 3:00 PM EST on June 1, 1950.

When we consider the philosophical possibility called idealism, we discover another reason why we cannot be sure about how old the universe is. Idealism is the possibility that nothing exists other than minds. Under this philosophical possibility, things such as stars and planets only exist to the extent that they are observed by minds. To really understand the theory, it helps to read a classic philosophical work such as George Berkeley's A Treatise Concerning the Principles of Human Knowledge (which you can read online here).

Critics may claim that idealism means believing that matter isn't real. But an idealist will counter that matter is real, but that it exists (really and substantially) not outside of minds, but only inside of minds.  Critics may also claim that idealism requires us to believe in some external ordering reality outside of our minds that is causing all of us to perceive the same things such as the moon and sun we see in the sky. But an idealist would encounter that such a thing is no real difficulty, and that materialism requires us to believe in something similar, since it requires us to believe in intricate fine-tuned laws of nature that make our existence possible. There are actually a great many difficulties involved with the idea that a universe that had no minds for billions of years turned into a universe containing minds. A theory of idealism (that minds are all that exist) is one way of getting around such difficulties.  It is not at all clear that a theory of idealism (that only minds exist) is less plausible or more far-fetched than conventional ideas about the relation of mind and matter.


Under the theory of idealism, how old is the universe? Apparently only as old as the earliest age of the first minds or mind. If idealism is true, then the age of the universe is very much uncertain.  An idealist will reject the idea that he has to believe the universe has existed for 13 billion years, and will say there was never actually a time when there existed nothing but matter and no minds. The idealist will claim that all that has ever really existed is minds, and that the universe is no older than the oldest mind that existed in it.