When Dreams or Visions Foretell a Death


There are many accounts of dreams that seemed to presage or foreshadow a death. Some examples:


During the many years while Joseph Rhine was doing his famous laboratory experiments with ESP, his parapyschology laboratory would receive many strange accounts from around the world. Rhine's wife Louisa Rhine collected and categorized such accounts. Her book Hidden Channels of the Mind is mainly a collection of first-hand accounts.  On pages 49-51 of the book, we have a striking account of a woman who experienced four dreams, all of the dreams suggesting a death that soon came.

In the first account a young girl of 12 had a dream while her mother was very ill, shortly before her mother died. She recalled it like this:

"I dreamed I saw my mother...She was walking down a beautiful avenue of trees — going away from me. I ran as fast as I could and realized that I could never catch up with her; then I called her. She turned and put up her hand and said to me, 'Go back, my daughter, your father needs you.' I immediately waked up and went into the house. My father met me in the hall and took me in his arms and said, 'Daughter, I need you. Your mother just left us.' When I told him that I had seen my mother, walking fast down this avenue of trees I had never seen before, he said, 'She must have given you her last farewell.' '"

The same female had three similar dreams, all coinciding with a death. Here is her account of the second dream, foreshadowing the death of her brother:

"In the first of these my younger brother was ill in a hospital in another state. I was ill and could not be with him, but my father and brothers were by his bedside when he passed away. I dreamed the night he passed away that he too was walking down this same avenue of trees that I had seen in my dream some twelve or thirteen years before, and I tried to catch up with him and he told me not to come on but to go back. When my father brought my brother's body home for burial, I told him about the dream and the hour. He said that my brother had passed away a few minutes before the hour I had awakened." 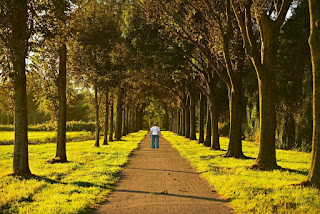 Here is her account of the third dream, foreshadowing the death of her husband:

"Then in January, 1947, my husband and I had had friends in for a game of bridge. Afterward we retired and both went to sleep. I had this same dream — this time it was my husband who was walking so fast. I ran and ran and called and called for him to stop — he, too, as in these two other dreams, put up his hand and said, 'Our precious children need you — go back.' I was frightened and turning in my sleep, put my arms around him, awakening him. The first thing he said was, 'I am so sick, please call the doctor.' He died in a few minutes."

Here is her account of the fourth dream, foreshadowing the death of her daughter's friend:

"Then, on Good Friday, 1934, my daughters and a friend of theirs went to a dance. Before their return I dreamed that my eldest daughter and this girlfriend of hers both suffered fatal accidents in front of my home, and the same avenue of trees came into the dream. When my daughters returned home around one o'clock I told them of my dream and my relief that they had returned safely. The next evening, the Saturday before Easter, my daughters had a dance in my home. The girlfriend was killed within a block of our house on her way to her home, and the accident was just as I had dreamed it."

On page 171 of the same book we have an account of a woman who had a dream of her brother-in-law's accidental death by shotgun a week before it happened:

"One night I had a dream that was so real I remembered every single detail of it. I dreamed that my brother-in-law, Eddy, was out hunting with a young boy who was faceless in my dream. All of a sudden Eddy dropped from a discharge from the boy's shotgun. He had climbed through a fence and didn't have the safety on. The pellets hit Eddy in the hip and he bled to death before they could get him to a doctor....The whole thing bothered me so I wrote to my sister and told her about it. They got my letter on Saturday and laughed about it. But Monday morning Eddy was killed just as in my dream."

On page 180 of the same book, we read a similar case of a dream exactly foretelling a death:

"During the war a woman who had occasionally been under the care of a physician because of a tendency to be anxious and over-nervous awoke one night crying hysterically, 'Jack is dead. Jack is dead.' She said she saw him go down in a burning plane. Jack, her son, was in the U. S. Army in the Pacific. When her husband could not calm her, the doctor was called. He finally gave her sedatives and had her hospitalized. Neither he nor her husband took seriously her idea that Jack was in a plane crash, for he was not even in the Air Force. But word came later that her son had been on a plane, and had indeed gone down in flames. He had been killed at approximately the time of his mother's experience."

On pages 180-181  of Hidden Channels of the Mind by Louisa Rhine, we are told about a person who had a detailed dream of a deadly train wreck, a dream that foreshadowed a very similar train wreck that soon occurred:

"Before he gave details, she told her dream; and the dream wreck coincided exactly with the actual wreck. When pictures were published, they agreed in every aspect with the dream. The weird part to her was that it was as if she had actually been there and seen it happen! She had not known anyone on that train. And it was the first and, to date, the last experience of that kind she had ever had."

On pages 188-189 of the same book, we are told about a person who had a sudden vision foretelling a tragedy:

"I was walking to work one morning when, to my utmost horror, I was stepping right into a room in a hospital. A figure lay on the bed, his head bandaged. I gazed at the face of my boyfriend. Then, as suddenly as it happened, I was again back on the sidewalk.  A few blocks farther and I saw him alive and well and I laughed to myself about my ridiculous vision. The next day he was severely injured at his work and died soon after of multiple skull fractures."

On pages 201-202 of the same book, we are told about a person who had a sudden dream foretelling his own death:

"One morning the ten-year-old son of a woman in Utah said, as she was getting him and her two other children ready for school, 'Oh, Mom, I had a terrible dream last night. A car ran me down. It was so awful.' "

On page 262 of Hidden Channels of the Mind by Louisa Rhine, we read another account of a dream that seemed to foretell a death that quickly came, although in a rather subtle and indirect way:

"She awoke one night from a simple but disturbing dream. It was only 4 a.m. when she awoke, but the dream was so vivid and so upset her that she could not go back to sleep. The dream, she says, was only that 'My cousin Lucille had appeared and told me she was going away... I asked her where she was going, but she just disappeared out the door....Later that morning they called me to say that Lucille, who as far as I knew was in perfect health, had had some kind of an attack and was unconscious. She remained so until she died that same day."

On the web site of Psychology Today, Sharon Hewitt Rawlette PhD tells us this astonishing account of a dream foretelling a death:

"In December 1975, a woman named Allison awoke from a terrible nightmare in which her 4-year-old daughter Tessa was on a train track. In the dream, Allison had been attempting to get her daughter to safety when Allison herself was struck and killed by a train.... Allison was in tears telling her husband about this terrifying nightmare. Not more than two weeks later, Allison and her daughter were at a train station seeing off a friend. An object fell onto the tracks, and, in an effort to be helpful, the little girl went to pick it up. Allison saw a train coming and rushed to save her daughter, but they were both hit and killed."

On pages 455 to 457 of Volume 5 of the Proceedings of the Society for Psychical Research, we have a long account by George King telling how his brother suffered a ship wreck sea disaster that upset his plans to lay an undersea cable.  George tells how his brother set forth on a new ship in a second attempt to lay the undersea cable. After his brother left on the sea mission, George had the dream or vision described below:

"I was soon asleep, but how long I remained so I know not...I found myself in the midst of a brilliant assembly, such as that I had recently left at King's College. I stood in evening dress on the steps at the entrance to a great and crowded hall....Suddenly my brother stepped out from behind them, and advanced towards me... I was much surprised to see him, and, going forward to meet him, I said : 'Hallo ! D., how are you here ?' He shook me warmly by the hand, and replied: 'Did you not know I have been wrecked again?' At these words a deadly faintness came over me. I seemed to swim away and sink to the ground. After momentary unconsciousness I awoke, and found myself in my bed."

Postscript: An 1848 book tells us here of a Mrs. Griffiths who seemed to have dreamed three times of a boating accident the night before she was supposed to go on a boat trip. The next day "the boat and all that were in it went to the bottom"  after a violent storm arose.
View on Mobile