When Two or More See the Same Apparition

"But, if precisely the same form was seen by two persons at the same place at the same time, we have evidence, and very cogent evidence, of the actual existence of such an object, by reason of the extreme improbability that the identical hallucination should arise in two minds at the same moment. If three or more persons beheld the same object at the same time, the proof amounts almost to demonstration, for the chances against such a concurrence of mental actions are as infinity to one."

In the 1887 book Posthumous Humanity: A Study of Phantoms, we have a report of three different witnesses who reporting seeing at different times a Mr. X after he died.  The first witness, a gardener, reported that the day before Easter he "turned about and saw myself face to face with the deceased Mr. X," who was dressed as he typically was while living.  The second witness, a grave digger,  also recognized a figure as Mr. X, after Mr. X had died.  This occurred the same day, the day before Easter. A third witness, a retired customs officer, also reported seeing an apparition of the deceased Mr. X on the day before Easter.

On page 99 of the remarkable book People from the Other World by Henry Steel Olcott, we have the following narrative in which the author claims to have seen a life-like apparition that was also seen by nineteen other people:

"I know the full value of words, and I mean to say unequivocally that a woman — a breathing, walking, palpable woman, as palpable as any other woman in the room, recognized not only by her sons and daughters, but also by neighbors present, as Mrs. Zephaniah Eddy, deceased December 29th, 1872 — on the evening of October 2d, 1874, walked out of a cabinet where there was only one mortal, and where, under ascertained circumstances, only this one man could have been at the time, and spoke to me personally in audible voice. And nineteen other persons saw her at the same time, and heard her discourse."

On page 158 of the book, we have an attestation to Henry Steel Olcott by a Franklin Bolles, who says he and three others saw the ghost of his mother, and that the ghost gradually dissolved away. Here is the statement:

Dear Sir : In reply to your inquiry as to my seeing a spirit-form dissolve outside the door of William Eddy's cabinet, I take pleasure in communicating the following facts :

In June last, I visited Chittenden, in company with my wife, wife's sister, Mrs. Waite, of this city, and a friend from Waterbury. On one evening during our stay, my wife's mother, a former resident of Hartford, who deceased March, 1859, at the age of 78 years, appeared to us in white clothing, looking so natural that we recognized her instantly. She stood outside the cabinet curtain, leaned her body forward, and stretched out her arms to her daughter, as though she were longing to embrace her. Mrs. Prior asked the spirit if she could not speak to us, and she seemed to make a desperate effort to comply. But suddenly,. as if she had exhausted all her power of materialization in the attempt, her arms dropped, and her form melted down to the floor, and disappeared from our view. The figure did not dissolve into a mist and disperse laterally, but sank down and disappeared, as if every particle comprising her frame had suddenly lost its cohesion with every other, and the whole fell into a heap together. Yours truly.

Olcott then quotes a Dr. T. G. Horton of Utica, NY stating that she saw a certain Honto apparition dissolve, and Olcott states he saw the apparition "dissolve up to her waist."  The book provides the following artist's illustration of a similar reported event (not a photograph). 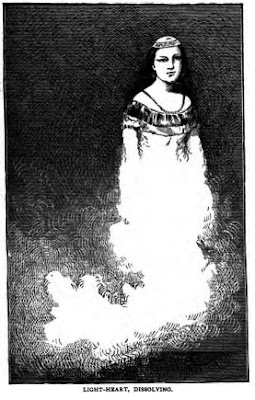