In a recent post entitled “The Universe Itself May Be Unnatural,” cosmologist Ethan Siegel discusses some issues that he calls “coincidence problems.” He says, “If aspects of the Universe that should be very different turn out to be similar, we call this a "coincidence problem." He discusses some cosmic coincidences, but neglects to discuss the most dramatic ones, including the “vacuum catastrophe” issue discussed here, and the issue I will discuss in this post: the coincidence of the proton charge being the exact opposite of the electron charge.

As many a scientist has admitted in recent decades, the fundamental constants of the universe are very fine-tuned to allow the existence of living creatures such as us, in the sense that there are quite a few “coincidences” required for our existence, lucky breaks that we needed and just happened to get. Any fully informative listing of the universe's fundamental constants should show at least one such coincidence, standing out very plain for the eye to see. Such a listing would look like this:

Imagine some bank employee named John Wilson who each day is supposed to send out an email to his superiors entitled “Today's most important transactions.” On a particular day such an email might honestly include the following:

Of course, this coincidence is very embarrassing to Mr. Wilson, as it suggests that the bank robbery was what they call an “inside job.” So Wilson would no doubt arrange his table of “today's important transactions” so that it somehow covered up the coincidence. Similarly, almost always modern scientists creating a table of fundamental constants of the universe will arrange the table in such a way so that no one can notice any coincidence involving the charge of the electron and the proton. For they don't want anyone to think that the universe is something like “an inside job.”

A convention is followed as to how this concealment is done. The convention is to avoid listing both the proton charge and the electron charge, and to list a single value that is called “the elementary charge.” So the table of fundamental constants will look like this:

The convention followed in tables of fundamental constants of listing both the proton charge and the electron charge under a single “elementary charge” line listing a positive value is therefore a deceptive concealment. It is a concealment because it hides from us a fundamentally important fact that we should be informed about, that there is a huge coincidence in nature involving the proton charge being the exact opposite of the electron charge. The concealment is deceptive (in the sense of being literally inaccurate) in the sense that after looking at tables of fundamental constants that follow this convention, you will be left with the very inaccurate idea that the electron charge is positive.

There is quite a bit of talk in the news these days about obstruction of justice. What we have going on in the typical table of fundamental constants is what we can call an obstruction of learning. The person who bothered to view such a table should have been informed of the basic fact that the proton has a charge that is the exact opposite of the charge of the electron. Such a person is obstructed from learning this important fact by the typical table of fundamental constants, just as if the scientist creating the table was interested in covering up such a fact, and sweeping it under the rug. 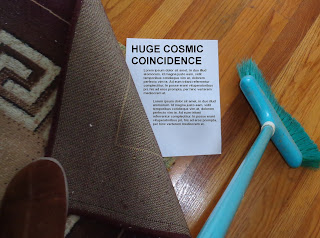 The “elementary charge” concealment trick is used in many different physics references, but very rarely a physicist will let down his guard and “spill the beans.” That's what happens in the informative and entertaining new book We Have No Idea by physics professor Daniel Whiteson and Jorge Cham (which has many fun little cartoons which make it easier to read than a typical book on science). On page 54 the authors state this:

If the quarks had any more (or less charge), then the charge of protons wouldn't precisely balance the negative charge of the electron, and you couldn't form stable neutral atoms. Without these perfect -1/3 and + 2/3 charges, we wouldn't be here. There would be no chemistry, no biology and no life.

But is there any explanation for this? Apparently not, because the authors next state this:

This is actually fascinating (or creepy, depending on your level of paranoia) because, according to our current theory, particles can have any charges whatsoever; the theory works just as well with any charge value, and the fact they balance perfectly is, as far as we know, a huge and lucky coincidence.

It's not just one coincidence but two coincidences. The first coincidence is that the absolute magnitude of the charge of the Up quark is exactly twice the absolute magnitude of the Down quark. The second coincidence is that when you add up the charges in a proton (consisting of two Up quarks and one Down quark), you get a charge that is the exact opposite of the charge of the electron. As far as we can tell, these are separate coincidences, each with a likelihood no better than 1 in 1,000,000,000,000,000. The chance of both occurring in nature is like the odds of you correctly guessing the telephone numbers of two strangers, and then correctly the guessing the telephone numbers of the next two strangers you met.

The use of the word "creepy" in the quote above is interesting, as if the authors were afraid of learning about some contrivance in nature needed for their own existence. Would not "wondrous" be a more suitable adjective?