From a Misty Cloud to a Human Form

In Robert Crookall's book Out of the Body Experiences, we have on page 35 this very interesting passage:

"Thus, Dr. R. B. Hout saw 'a fog' leave a dying body (and gradually become its 'double'). E. W. Oaten saw 'a smokelike vapor' (which gradually became 'an exact duplicate' of the person who had just died). Florence Marryat saw 'a cloud of smoke' (which 'gradually acquired the shape of the girl’s body'). J. C. Street observed 'a column of vapor' (which assumed the form of the man under observation). Major W. T. Pole reported 'a shadowy form” (which became 'an exact counterpart of the body on the bed'). Mr. 'G' described 'clouds' (which assumed the form of the body they had left). Maurice and Irene Elliott spoke of 'a white hazy mist' (which also took the shape of the body it had left)."

On page 105 we have a fuller discussion in the same vein:

"We have already referred to the 'mist' observed to rise from dying bodies...Mrs. Annie Brittain saw that 'the mist' which left the body of a woman passed through a second stage and became its counterpart. Lily J. Price, J. P., of Australia, wrote and told me how, when present at the 'passing' of a child, she saw 'a mist' leave the head (first stage). She continued, 'The mist gradually took the shape of the child’s form [second stage].' Mrs. G. Vivian, B.A.,  saw 'a mist' leave the body of her dying mother. 'It gradually took shape and resembled my mother.' Mrs. 'Alexander' gave an identical description, as did Mrs. E. Herrick, T. E. Morgan, and an American literary woman.  The Reverend J. Lewis  saw a gambler die. A 'mist' left his body and later assumed the gambler’s form."

On page 106 we read this: "Professor E. Bozzano quoted a missionary from Tahiti who was told by the natives: 'Shortly after a human body ceases to breathe, a vapor rises from the head . . . this vapor gradually . . . assumes the form of the inert body.” 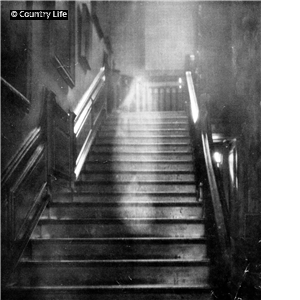 Postscript:  The description of seances of Franck Kluski by  anatomy professor F. W. Pawlowski is one of the most astonishing testimonies of paranormal phenomena ever recorded. Beginning here you can read an account of more than five pages, filled with the most extraordinary claims. The quote below is another example of the phenomenon referenced by this post's title:
"As the phantoms made their appearance I saw something resembling luminous smoke or fog floating above the head of the medium like a small cloud. This cloud moved to one side and in a few seconds became a human head, or else it would spread out vertically and become a complete human figure, which immediately began to walk about. The most astonishing and interesting part of these phenomena, so to speak their most important feature as far as I was concerned, was the absolutely human behavior of the apparitions. They acted precisely like guests at a party. As they passed around the table they greeted the more familiar participants with a smile of recognition, whereas they studied any newcomers attentively. The inquisitive look in their eyes is hard to describe. I could see from their efforts to understand our expressions, our smiles, our questions and answers, as well as from their actions, that they were particularly anxious to convince us of the fact that they were real beings and not illusions or hallucinations."