Homochirality Is Accidentally Unachievable, With or Without Cosmic Rays

I can give an analogy for why homochirality is such a mystery. Let us imagine a very large box filled with 5000 cards, each displaying one of the letters in the alphabet. On one side of each card is a letter. For example:

On the back side of each card is the mirror image of the letter on the front side of the card. For example:

Now, let us suppose that someone dumped this large box of cards from the top of a tall building. Imagine that the cards fell to the ground, forming a set of useful instructions that was 5000 letters long, and that none of those letters were the mirror  images of the letters in the alphabet.

The origin of life is as hard-to-explain as the falling cards event just described.  A team of 9 scientists wrote a scientific paper entitled, “Essential genes of a minimal bacterium.” It analyzed a type of bacteria (Mycoplasma genitalium) that has “the smallest genome of any organism that can be grown in pure culture.” The paper concluded that 382 of this bacteria's protein-coding genes (72 percent) are essential. So we can conclude that any self-reproducing cell would need a minimum of at least 50 types of proteins (each coded by a separate gene), and that such proteins would have an average amino acid length of at least 100 (the average amino acid length of the proteins in the most primitive prokaryotic cells is more than 150).  50 times 100 is 5000.

So you need at least 5000 amino acids arranged in just the right way to get a self-reproducing cell. The chance of such a thing occurring accidentally would be comparable to the chance of someone dumping a very large box with 5000 characters cards from a tall building, and those cards accidentally forming into a useful, coherent 5000-character set of instructions.  And just as it would be fantastically improbable that dumping such a set of 5000 character cards from a tall building would ever result in the cards only showing the regular version of a letter on the front of each card, and never showing the mirror image of a letter on the back of each card, it would be fantastically improbable that you would end up with a cell containing about 5000 amino acids that were all left-handed, as in living things.

We can calculate this probability using a large exponents calculator. The probability of you getting 5000 amino acids that were all left-handed from a random set of amino acids that was equally left-handed and right-handed is 1 in 2 to the 5000th power.  As we can see in the screen below (using this large exponents calculator), such a probability is less than 1 in 10 to the 1500th power, less than 1 in 101500. 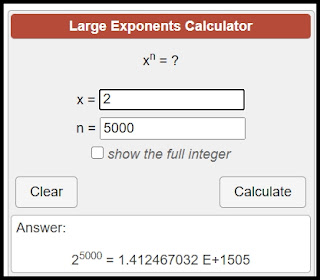 I haven't even discussed the improbability of getting all the sugars in RNA and DNA molecules to be right-handed, which is an additional explanatory nightmare every bit as bad as the one just discussed. In fact, the improbability is far worse if we consider things from a DNA perspective.  The DNA to specify 5000 amino acids requires three nucleotides to specify each amino acid, and each one of those nucleotides involves a sugar that is always right-handed. 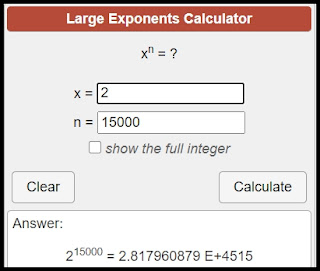 The attempt to explain homochirality was made in the paper "The Chiral Puzzle of Life" by Noemie Globus and Roger D. Blandford (and another similar paper by the same authors).  The authors imagine two different types of life existing in the early Earth: what they call "live" life (like the life that we know), and what they call "evil" life. The "evil" life they imagine is the mirror image of known life, with an inverse homochirality. So instead of having sugars that are all right-handed, the "evil" life would have sugars that are only left-handed. And instead of having amino acids that are only left-handed, the "evil" life would have amino acids that are only right-handed.  There is zero evidence that any such "evil" life ever existed, and scientists do not typically maintain or believe that any such "evil" life (with an inverse homochirality) ever existed.

The authors discuss some far-fetched scenario by which cosmic rays might have caused the "live" life to have an advantage over the imagined "evil" life. In a nutshell, this attempt at an explanation is the story that "homochiral life defeated its mirror-image competitor, with some help from cosmic rays."

But our hype-heaving science news sites have promoted the Globus and Blandford scenario as a "possible explanation for homochirality." This merely proves that the goofiest kind of attempt at an explanation can be trumpeted by our yearning-to-say-some-progress-was-made science news media, which has a ravenous appetite for clickbait teaser headlines that can increase web page clicks and advertising revenue.  But at least one of these summary stories gives us a hint that "there's no there there" in the Globus and Blandford account for homochirality.  After giving us a misleading headline of "Cosmic Rays May Explain Life’s Bias for Right-Handed DNA," the story in Quanta magazine confesses, "The theory doesn’t address, for example, how 'live' organisms and 'evil' organisms managed to materialize from a primordial smoothie containing both right- and left-handed building blocks." Which means it does nothing to solve the homochirality problem.