In two previous posts I discussed 34 cases in which multiple witnesses reported seeing the same apparition. The two posts are below:

In this post I will discuss additional cases of this type.  I will give links that will usually take you directly to the exact page I am quoting or citing.

On page 402 of Volume 24 of the Journal of the Society for Psychical Research, we have the following account:

"The first is the case of a certain Mr. William Smith (pseudonym) who had been for many years Senior Warden of his church, and as such had been accustomed to collect the offertory. On a certain Easter Monday Mr. Smith committed suicide, and on the following Sunday he was seen by the officiating clergyman and two members of the congregation standing on the chancel steps when the offertory was being presented by the two acting Wardens."

On page 297 of Volume 27 of the Journal of the Society for Psychical Research, we read the following: "In February 1932, the hauntings described below began : the apparition of Samuel Bull being seen by the members of the family." On the next page we read this about the same case:

"The apparition was seen by Mrs Edwards and the grandson (aged 21) and then by all the others, widow and grandchildren. At first everyone was terrified and the children screamed, but later, and on subsequent occasions, were calmer, but in a state of quiet awe. The  'appearances' have been very frequent since, but no diary has been kept of dates and happenings."

On page 300 of the same volume, we are told "the appearances are not fleeting, but quite lengthy, and [on] one occasion at least, lasted for several hours." At least eight witnesses reported seeing the apparition: Mrs. Edwards (Bull's daughter), her husband, Bull's widow, and Mrs. Edwards' five children (Bull's grandchildren). On page 302 of the same volume, we read, "Mrs Edwards and the grandson, James Bull, aged 21, saw the apparition together."  We are told this:

"Mrs Edwards said that all the members of the family, including her husband, had seen the figure. The figure appears to be quite life-like to Mrs Edwards. It does not glide, but walk, and seems solid." 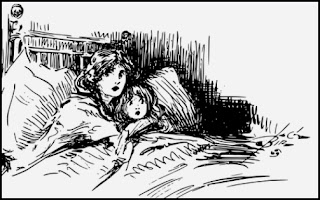 On page 252 of Volume 28 of the Journal of the Society for Psychical Research, we read the following account by J.E. Moore and Marjorie Moore of an apparition seen by multiple observers:

"It was during one of these visits that the following covenant was drawn up between my wife's mother and I. ' Should I die before her I would come back and visit her if possible ' —and the same was to apply in her case. —This was agreed in my wife's presence. We returned to Portland in due course and I quite forgot the incident, but the other partner to this strange agreement was in the meanwhile unexpectedly called to the place of many ' Mansions ' but had not forgotten her part in the play of this strange drama. About six months after this incident, whilst the clocks were chiming the midnight hour, there appeared by the bedside occupied by my wife and myself the spiritual form of my wife's mother.  She looked beautiful in her Angelic state, as she stood there quite close to Baby's cot, which was in close proximity to our bed. Her earthly stay only occupied a few seconds—but quite long enough to convince us that she had kept her promise. This was witnessed by myself & wife simultaneously."

On page 240 of Volume 29 of the Journal of the Society for Psychical Research, we read of an apparition that was seen by multiple observers at the same time.

"Only on one occasion does the figure seem to have appeared to two persons simultaneously. This was during August, 1935. At about 8 o'clock, while the family and several guests were sitting at dinner in the hall, a young Dutchman present, who had never heard of the ghost, saw a stranger walk into the door, cross the hall, and go upstairs. 'Mr Henry Westfield ' also saw it, and recognised it as the ghost. "

On the next page we read, "At least two of the people who have reported this phenomenon had not previously been told anything about the ghost, so that suggestion, unless it were a telepathic suggestion, would not account for it."  On page 243 of the same volume, we read the following:

"The case presents many interesting features, and is probably as well authenticated a ghost story as it would be possible to find. The phenomena are many and varied, and have been witnessed by several people, some of whom are quite independent (i.e. they did not know about the ghost) so that suggestion can be eliminated. It seems highly improbable that so many phenomena of such widely different types could have been the result of malobservation or pure imagination."

On page 207 of Volume 6 of the Journal of the Society of Psychical Research, we read that "repeated apparations of the same person" were seen by his wife, his mother in law, by a Mrs. B, and "another lady."

On page 230-231 of the same volume, we have an account of a person saying he saw an apparition that "before my very eyes vanished." Mentioning how others had seen the same thing, he stated, "It certainly surprised me to see what was apparently 'too solid flesh' dissappear before my very eyes, and when we got outside my friend told me that his was the figure which came to different members of their family so often, and, indeed, had been the cause of their leaving one house."

On page 33 of Volume 31 of the Journal of the Society for Psychical Research,  we have an account of an apparition seen by two people.  A lady, identified in the journal as Mrs. X, killed her husband and herself at about 9 PM on Monday, December 5, 1938. The next morning (December 6) a man and woman reported seeing Mrs. X, hatless, walking on the road outside her house at about 9 AM.  As we read on page 34, the husband stated the following (which the wife agreed with):

"Also Mrs X was the only person in sight on the road at the time,  neither did we mistake any one else for her as she happened to be a very unmistakable woman owing to her style of hairdressing, etc. We passed within say 6 feet of her."

On page 239 of Volume 33 of the Journal of the Society for Psychical Research, and the next page, we have an account of an apparition of David Western that was seen by a Mrs. Carter and Janet Mack in 1942, long after David had died in 1941.

On page 75 of Volume 6 of the Journal of the Society for Psychical Research, we read the following mention of an apparition seen by multiple observers:

"Mrs. G. and her three brothers and sister, when children, used every evening to see an apparition of a lady in a stiff brocade skirt, whicli rustled as she moved, pass through the garret where they played. She was always seen by all present and had also been seen by two ladies next door."

On page 224 of Volume 5 of the Journal of the Society for Psychical Research, we read of an apparition seen by three out of four sisters (the other one looking in the wrong direction to see it):

"The apparition glided onwards towards my sisters, who were standing inside the room, quite close to the outer door, and who had first caught sight of it, reflected in the mirror. When within a few inches from them it vanished as suddenly as it appeared. As the figure passed we distinctly felt a cold air which seemed to accompany it. We have never seen it again, and cannot account in any way for the phenomenon."

The account states that all four of the sisters felt the cold air that accompanied the apparition.

On page 371-372 of Volume 14 of the Journal of the American Society for Psychical Research, we read that this occurred the day after the drowning death of Mr. Macy, due to an accident involving a ship named Niagra on Lake Michigan:

"In the night, after the family had retired to rest, my daughter discovered a bright light in the sitting-room opening into hers, and the same shadow, which she had indistinctly noticed in the morning, now appeared in the shape and exact semblance of Mr. Macy. She informed her mother of the apparition, immediately adding, under impression, 'Mr. Macy is drowned.'  Another daughter, who is also a medium, sleeping in a different part of the house, saw the same light and the shadowy form of Mr. Macy as he appeared to her sister, upon which she was influenced to write 'Niagara — drowned by the upsetting of the small-boat.' The next day, and for the first time, the news of the catastrophe, and the manner of Mr. Macy's death, reached our village."

Skeptics claim that appartions are just hallucinations. But such skeptics cannot credibly account for the 45 sightings I have discussed in this post and the two posts mentioned at the top of this post, which altogether give 45 cases in which an apparition was seen by multiple observers.  The chance of two people having the same visual hallucination is microscopic, even slimmer than the chance of two members of a family having the same dream on one night.  In quite a few of the cases I have discussed in these posts, it is not just two people seeing the same apparition, but three or more.  In future posts I  will discuss dozens of additional cases in which apparitions were seen by multiple observers.