Your Physical Structure Did Not Arise Bottom-Up, So Why Think Your Mind Did?

Neuroscientists typically maintain that human mental phenomena are entirely produced by the brain. But this claim is mainly a speech custom of a social group, a belief dogma of a belief community, rather than something that is justified by facts. Looking at the human mind, we find again and again characteristics and abilities that cannot be credibly explained though any known features of the brain. Consider the following:

Clearly, the human brain is an extremely poor candidate for something that can explain the human mind. But people continue to cling to the idea that the brain generates the mind (or the equally faulty idea that the brain is the mind). If you ask someone to justify such a belief, the person may say something like this: “You must believe your mind comes from your brain, because there's no other organ in the body that could be making the mind – and of course it would be ludicrous to believe that the mind comes from something other than the body.” But such an idea should not seem ludicrous in the least when we consider that another huge aspect of ourselves – the human form or structure – cannot possibly have arisen bottom-up from anything in our bodies, and must somehow arrive from outside of our bodies or from something different from our bodies.

Let us consider how little we know about how humans come into the world. When a sperm unites with a female ovum, the result is a speck-like fertilized egg. But somehow over 9 months, there occurs a progression leading from this tiny speck to a full human baby. This process is sometimes called morphogenesis or embryogenesis. How does this progression happen? We have basically no idea.

For decades many have pushed an untenable misconception about morphogenesis. The idea is that DNA in a cell contains a blueprint or set of instructions for making a human, and that morphogenesis occurs when such instructions are read and carried out inside the human womb. But there are several reasons why this idea cannot possibly be true. They include the following:

See this post, this post and this post for a very detailed discussion of why DNA cannot be a human specification. Those posts include quotes by quite a few biological experts supporting my statements on this topic.  Below are only a few of more than a dozen similar comments that I have collected at the end of this post.


On page 26 of the recent book The Developing Genome, Professor David S. Moore states, "The common belief that there are things inside of us that constitute a set of instructions for building bodies and minds -- things that are analogous to 'blueprints' or 'recipes' -- is undoubtedly false." Scientists Walker and Davies state this in a scientific paper:

"DNA is not a blueprint for an organism; no information is actively processed by DNA alone. Rather, DNA is a passive repository for transcription of stored data into RNA, some (but by no means all) of which goes on to be translated into proteins."
Geneticist Adam Rutherford states that "DNA is not a blueprint." A press account of the thought of geneticist Sir Alec Jeffreys states, "DNA is not a blueprint, he says."  B.N. Queenan (the Executive Director of Research at the NSF-Simons Center for Mathematical & Statistical Analysis of Biology at Harvard University) tells us this:

"DNA is not a blueprint. A blueprint faithfully maps out each part of an envisioned structure. Unlike a battleship or a building, our bodies and minds are not static structures constructed to specification."

"The genome is not a blueprint," says Kevin Mitchell, a geneticist and neuroscientist at Trinity College Dublin. "It doesn't encode some specific outcome."  His statement was reiterated by another scientist. "DNA cannot be seen as the 'blueprint' for life," says Antony Jose, associate professor of cell biology and molecular genetics at the University of Maryland. He says, "It is at best an overlapping and potentially scrambled list of ingredients that is used differently by different cells at different times."  Sergio Pistoi (a science writer with a PhD in molecular biology) tells us, "DNA is not a blueprint," and tells us, "We do not inherit specific instructions on how to build a cell or an organ."

The visual below shows you the very humble reality about DNA (so much less than the grossly inflated myths so often spread about it): that DNA merely specifies low-level chemical information such as the amino acids that make up a protein.  Particular combinations of the "ladder rungs" of the DNA (the colored lines) represent particular amino acids (the "beads" in the polypeptide chain that is the starting point of a protein). 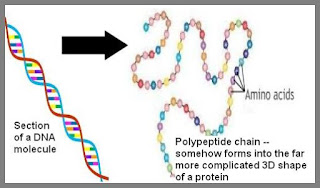 Human bodies have multiple levels of organization beyond such simple polypeptide chains, including:

None of the structures listed above are specified by DNA or genomes or genes. How such structures arise is unknown.

In light of the facts I have discussed, we must draw a very important conclusion: the biological form of an individual (his overall body plan or structure) cannot originate bottom-up from something within the human body. The physical structure of a human must come from some mysterious source other than the human body or outside of the body. Much as we would like to believe the widely circulated myth that the form of your body comes from your DNA, the facts do not at all support such an idea. We know of nothing in the human body that can be the source of the human form or body plan, nothing that can explain the marvel of morphogenesis, the progression from a speck-sized egg to a full-sized human body. So the human form or physical structure or human body plan must somehow come from outside of the body or from some source other than the body.

The person who has carefully considered such a reality should have no objection to the idea that the human mind must come from some source outside of the body or different from the human body. Both conclusions follow from similar types of evidence considerations. Just as DNA fails in every respect to be a credible source for the human physical form, the brain fails in almost every respect to be a credible source of the human mind (for reasons discussed at great length in the posts of this site).

We must climb out of the tiny thought box of materialism and consider other possibilities. One possibility is that the human mind comes from some spiritual or energy reality that co-exists with the human body. In such a case it might be true that the mind of each person has a different source, but not a bodily source. Another possibility is that every human mind comes from the same source, some mysterious and unfathomable cosmic reality that might also be the source of the human physical form.

To gain some insight on how we have been conditioned or brainwashed to favor a bad type of explanation for our physical structure and minds, let us consider a hypothetical planet rather different from our own: a planet in which the atmosphere is much thicker, and always filled with clouds that block the sun.  Let's give a name to this perpetually cloudy planet in another solar system, and call this imaginary entity planet Evercloudy.  Let's imagine that the clouds are so thick on planet Evercloudy that its inhabitants have never seen their sun.  The scientists on this planet might ponder two basic questions:

Having no knowledge of their sun, the correct top-down explanation for these phenomena, the scientists on planet Evercloudy would probably come up with very wrong answers. They would probably speculate that daylight and planetary warmth are bottom-up effects.  They might spin all kinds of speculations such as hypothesizing that daylight comes from photon emissions of rocks and dirt, and that their planet was warm because of heat bubbling up from the hot center of their planet.  By issuing such unjustified speculations, such scientists would be like the scientists on our planet who wrongly think that life and mind can be explained as bottom-up effects bubbling up from molecules.

Facts on planet Evercloudy would present very strong reasons for rejecting such attempts to explain daylight and warm temperatures on planet Evercloudy as bottom-up effects. For one thing, there would be the fact of nightfall, which could not easily be reconciled with any such explanations. Then there would be the fact that the dirt and rocks at the feet below the scientists of Evercloudy would be cold, not warm as would be true if such a bottom-up theory of daylight and planetary warmth were correct.  But we can easily believe that the scientists on planet Evercloudy would just ignore such facts, just as scientists on our planet ignore a huge number of facts arguing against their claims of a bottom-up explanation for life and mind (facts such as the fact that people still think well when you remove half of their brains in hemispherectomy operations, the fact that the proteins in synapses have very short lifetimes, and the fact that the human body contains no blueprint or recipe for making a human, DNA being no such thing).

We can imagine someone trying to tell the truth to the scientists on planet Evercloudy: