The Chemistry Professors Who Documented the Paranormal

A critic of claims of the paranormal will sometimes insinuate that claims of paranormal activity are not made by very careful and respectable observers such as scientists.  Any such claim is not at all historically accurate. In my three part series When World Class Scientists Saw Ghosts (here, here, and here), I discuss how some great or famous scientists provided abundant written testimony in favor of the paranormal, including mysterious apparitions, ESP and levitations. Abundant evidence for the paranormal was also provided by twentieth century professors such as Joseph Rhine.

Let us look at some cases of chemistry professors who abundantly documented the paranormal. One such professor was William Gregory (1803-1858), a professor of chemistry at the University of Edinburgh (founded in 1582, and the sixth oldest English university).  Gregory (the author of a conventional chemisty textbook) was the author of the long book Letters to a Candid Inquirer, on Animal Magnetism, which you can read online here.  The book is a very fascinating work on hypnosis (the title uses a term for hypnosis which went out of vogue shortly after the book was published, being replaced by the word hypnosis).

Most of the second half of the 384-page book is a discussion of paranormal effects observed under hypnosis, mainly clairvoyance. Gregory provides very many fascinating accounts of clairvoyance that he personally observed in hypnotized subjects. The reality of clairvoyance under hypnosis had been affirmed by a prestigious French academic committee decades earlier, a five-year committe of the Royal Academy of Medicine. 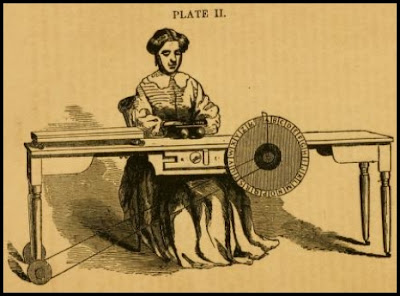 Hare reported getting "copious" intelligible messages from such a device, which should have been impossible from any person manually moving the device from behind it, as such a person would not have been able to see the letter wheel and which letters corresponded to the table positions.  He reported getting answers known only to himself, using one of the letter wheel devices he invented:
"As a test question, I inquired 'What was the name of a partner in business, of my father, who, when he had left the city with the Americans during the Revolutionary war, came out with the British, and took care of the joint property?' The disk revolved successively to letters correctly indicating the name to be Warren. I then inquired the name of the partner of my English grandfather, who died in London more than seventy years ago. The true name was given by the same process."
On this page Hare reports eight beautiful lines of rhyming  poetry mysteriously spelled out using such a device.
Hare reports seeing these paranormal manifestations:
"I first saw a table continue in motion when every person had withdrawn to about the distance of a foot; so that no one touched it; and while thus agitated on our host saying, 'Move the table toward Dr. Hare,' it moved toward me and back again. At the same premises...the table was violently overset, so as to have its legs uppermost. Yet while thus upside down, it continued to vibrate, a single finger of a medium girl, about twelve years of age, being the sole means of human contact therewith. This I ascertained, with the greatest care..."
In the nineteenth century the type of observations just mentioned were reported countless times by many reliable witnesses who reported tables moving, turning, tipping and often levitating when no one was touching the tables (see here and here and here for some examples). Completely ignoring all such accounts, and acting as if they had spent maybe ten minutes reading up on the nineteenth century phenomena called table turning, modern writers continue to tell us the tale that Faraday successfully explained such phenomena as merely "unconscious muscular action." This story is one of the most groundless of the many legends of scientist lore, where we find many unfounded claims of scientist achievements.  Hare's reports of paranormal effects involving tables were abundantly replicated in a two-volume work on the topic by Count Agenor de Gasparin.
On page 60-80 of his book, Hare quotes at length many observations of paranormal events from outside of the United States, reports dating from about the same time as his experiments. He includes the following astonishing account from Count Agenor de Gasparin, indicating some mysterious invisible power:
"Each of us, in his turn, gave orders to the table, which it promptly obeyed ; and I should succeed with difficulty in explaining to you the strange character of these movements, of blows struck with an exactness, with a solemnity that fairly frightened us. 'Strike three blows ; strike ten blows. Strike with your left foot ; with your right foot ; with your middle foot. Rise on two of your feet ; on only one foot ; remain up ; prevent those on the side raised from returning the table to the floor.'  After each command the table obeyed. It produced movements that no complicity, involuntary or voluntary, could have induced....  Each one of us gave orders with equal success. Children were obeyed as well as grown persons."
Although not actually holding a title of chemistry professor, the German scientist Johann Zollner was a professor of physical astronomy, and did some work in spectroscopy and astrochemistry.  Zollner published a work entitled Transcendental Physics describing his experiments documenting inexplicable  paranormal effects.
The most remarkable of quite a few paranormal results are shown in the visual below.  Zollner set up a pair of wooden rings (obtained from a G. de Liagre) so that they were tied securely with a very strong cat-gut wire, as shown in the Before part of the visual below (the illustrations are from his book). He states the following:
"The two wooden rings and the above-mentioned (p. 98) entire bladder band were strung on to a piece of catgut one millimetre in thickness, and 1.05 metre in length. The two ends of the catgut were tied together by myself in a knot, and then, as formerly in the case of the string, secured with my own seal by myself."
Zollner then tells us the following, mentioning the medium Henry Slade he was testing:
"After a few minutes had elapsed, and Slade had asserted, as usual during physical manifestations, that he saw lights, a slight smell of burning was apparent in the room — it seemed to come from under the table, and somewhat recalled the smell of sulphuric acid. Shortly afterwards we heard a rattling sound at the small round table opposite, as of pieces of wood knocking together. When I asked whether we should close the sitting, the rattling was repeated three times consecutively. We then left our seats, in order that we might ascertain the cause of the rattling at the round table. To our great astonishment we found the two wooden rings, which about six minutes previously were strung on the catgut, in complete preservation, encircling the leg of the small table."
In the After part of the visual below, we see the results as depicted (here and here) in Zollner's book. 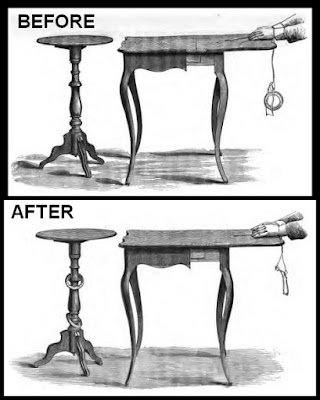 Here we have two inexplicable effects that you can see by closely inspecting the drawings above. First is that the two wooden rings were inexplicably removed from a tied sealed catgut binding that had not been changed, something that would have taken extensive fiddling that Zollner never observed. The second inexplicable effect is that the wooden rings were now in a position that should have been quite impossible for them to have reached, given the physical construction of the small table on the left.  The tables were furniture in the home of a friend of Zollner's, and could not have been kind of special trick tables prepared by the person being tested.
Zollner regarded this as being very clear proof of a paranormal effect. He began to speculate whether it was proof of some kind of effect by which solid matter can be passed directly passed through solid matter.
Such an idea does not seem impossible when we consider the possibility of a fourth dimension. Let us consider a two-dimensional creature, like those depicted in the classic imaginative work Flatland by Edwin Abbott. To such a creature, it would seem very possible for some creature (represented by the circle) to escape from the box on the left of the visual below, by going out the exit area on the left. But to such a creature, it might seem impossible to escape from the box on the right, there being no such exit area. 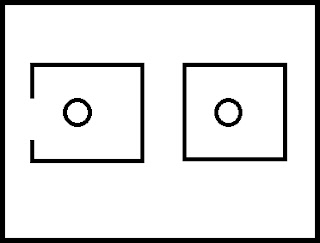 But to a three-dimensional being, this "impossibility" vanishes.  For such a being, the ring in the box on the right can be removed by simply lifting it up in the air, and taking it out of the box. Similarly, to a four-dimensional being, moving solid matter through solid matter (what seems like an impossibility to us) may be as easy as lifting a ring out of a box with an open top.  But just as a two-dimensional being could never imagine how a ring could be removed from a box by lifting the ring up, we three-dimensional beings might never be able to imagine how solid matter could be passed through solid matter, by some route conceivable only to four-dimensional beings.
A professor of chemistry at the University of St. Petersburg, A. Butlerof wrote up an account in which he claimed to have witnessed the most astonishing paranormal phenomena while testing a medium named Williams, while the medium was tied up in a hotel room of Butlerof and a Mr. Aksakof.   Below (dating from 1875) is an excerpt:
"Presently phosphorescent lights were floating in the air, and immediately the form of John King became visible. This apparition is accompanied by a greenish phosphorescent light...The form was outside the cabinet, and near to us. We only saw it for a moment at a time ; the light vanished, and the form retreated into the darkness, but reappeared again as quickly. The voice of John comes from the spot where the figure stands, generally, but not always, while the form is invisible. John asked us what he should do for us. M. Aksakof begged that he would rise to the ceiling and say a few words to us in that position. Accordingly we saw the form appear just over our table, and then gradually rise upwards to the ceiling, which became visible in the light proceeding from the luminous object in the hand of the figure. While up there, John called out to us—' Will that do ?' "
A very similar account was published two years earlier in the Daily Telegraph.