The Evidence for Out-of-Body Experiences

Very many people are familiar with how people in recent decades have reported moving out of their bodies during near-death experiences.  But many people are not aware that the evidence for such out-of-body experiences goes way back before the publication of Raymond Moody's famous 1976 book Life After Life.

"After lying down to rest, I remember of feeling a drifting sensation, of seeming almost as if I was going out of the body. My eyes were closed ; soon I realized that I was, or seemed to be, going fast somewhere. All seemed dark to me ; suddenly I realized that I was in a room, then I saw Charley lying in a bed asleep; then I took a look at the furniture of the room, and distinctly saw every article of furniture in the room, even to a chair at the head of the bed, which had one of the pieces broken in the back ; and Charley's clothes lay on that chair, across the bottom of chair."

The full account includes a "veridical verification" element, as Charley later writes back to Mrs. Crans to say that the room looked exactly as described, and that he also saw someone named Allie at the time Mrs. Crans reported seeing her during the out-of-body experience.

A few years later there was published an account you can read at the link here, which takes you to page 180 of Volume 8 of the Proceedings of the Society for Psychical Research, published in 1892. I have summarized this account of an out-of-body experience at the post here.

In the 1960's and 1970's the scholar Robert Crookall PhD collected many accounts of out-of-body experiences.  His works on the topic include these:

The More Astral Projections book gives about 160 cases of out-of-body experiences. Below are some examples, none of which involved people under anesthetics:

At the end of his book More Astral Projections, Robert Crookall has some interesting summary statistics regarding how often such accounts had recurring characteristics. He used the term "the double" for a kind of spirit body that was a double of the human body. For what he called "single-type cases" the statistics included the following:
For what Crookall called "double-type cases" the statistics included the following:
We surely would not expect anything like such percentages if mere hallucination was involved.  In random hallucinations, you would expect matching specific details in fewer than 1 in 1000 cases, there being innumerable thousands or millions of ways in which a random hallucination might unfold. 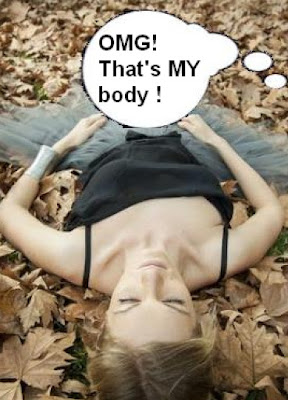 The 1973 book Glimpses of the Beyond: The Extraordinary Experiences of People Who Crossed the Brinks of Death and Returned by Jean-Baptiste Delacour preceded the much more famous Life After Life book by Raymond Moody. (Reading the book may require setting up a login with archive.org and doing an online "borrow" of the book.) Some of the accounts in Delacour's book sound like the well-known type of near-death experiences Moody described. For example, on page 14 Daniel Gelin (a well-known French actor) states that when being treated in a hospital "suddenly, I found myself floating through the room." On the next page, Gelin describes encountering his deceased mother and father, who led him to a "rose-colored world, a sort of fairy garden" where he encountered his deceased son. But then an "inexorable force" caused him to return to the hospital room.

On page 20 of the same book, we hear the account of Betty Patterson, who said this:

"At first I felt as if my spirit, my self, was separating from
the bulk of my body and floating up to the ceiling of the room.
From up there I could look down at my body on the operating table. Then this scene vanished from my field of view, and
suddenly I was surrounded by gentle light and soft music.
I was overcome by a feeling of deep content that I had
never felt in life. This sensation overpowered me in such a
way that I no longer felt any desire for earhly life. I tried
to move in the direction the sounds were coming from,
but something forcibly prevented me. Apparently, the time had not come for the final separation from the body."

On page 20 of the book, we also read of a James Lorne who was clinically dead for five minutes after suffering a heart attack. Lorne states this:

"I felt myself floating in the air and could clearly see my body lying down there. I landed in a long corridor filled with soft twilight. At the end a bright light was shining.  I could also hear voices coming from there."

Lorne describes encountering some "splendid garden" with people in it, but when he tried to move closer, the scene always receded.

On page 37 we read of a Mrs. Francis Leslie who had her heart revived after it had stopped for quite a while, for so long that she was declared dead. She said that she found herself mysteriously "floating in a long shaft" that she also described as a "tunnel." She heard a voice calling from far away in the tunnel, which she identified as someone who had died.  She then felt herself back in the hospital. After describing her experience, she died about 12 hours later.

On page 40 a doctor says that heart patients "again and again have the sensation of being disembodied" and that "in a sense they feel they are floating above themselves," and that they see their body "lying below them on the ground."

What is interesting about the accounts I just gave from the 1973 Delacour book is that at the time it was published, almost no one except scholars of the paranormal had heard about out-of-body experiences or near-death experiences, so such accounts cannot be dismissed as some kind of conformity to a widely-known pattern. Several years after Delacour's book (after the publication of Moody's Life After Life) a host of people began reporting out-of-body experiences, and such reports have continued at a constant pace.

In a book by Colin Wilson, we read the following:

"In the 1960s the psychologist Charles Tart studied a borderline schizophrenic girl whom he called Miss Z., who told him that she had been leaving her body ever since childhood. To test whether these experiences were dreams Tart told her to try an experiment: she was to write the numbers one to ten on several slips of paper, scramble them up, then choose one at random when her light was out and place it on the bedside table. If she had an out-of- the-body experience in the night she had to try to read the number (she claimed to be able to see in the dark during her OBEs). She tried this several times and found she always got the number right. So Tart decided to test her himself. The girl was wired up to machines in his laboratory and asked to try and read a five-digit number which Tart had placed on a high shelf in the room next door. Miss Z. reported correcdy that the number was 25132."

Wilson tells us the following:

"Many thousands of examples of out-of-the-body experiences have been reported in the literature of the paranormal: one eminent researcher, Robert Crookall, devoted nine volumes to such cases. Another, the South African investigator J. C. Poynton, collected 122 cases as a result of a single questionnaire published in a newspaper. A similar appeal by the English researcher Celia Green brought 326 cases. One survey even produced the incredible statistic that one in ten persons have had an out-of-the-body experience."

Out-of-body experiences are very powerful evidence against the central dogmas of modern neuroscientists, the dogma that the brain is the cause of human mental phenomena such as consciousness, self-hood and thinking,  and the dogma that the brain is the storage place of memories.  There are a host of good reasons for rejecting such claims, such as the fact that brains are too slow and noisy to account for instant very accurate human recall, the fact that many people think very well and remember very well after half or most of their brain has been destroyed by disease or surgery (as discussed here and here), the fact that the brain has nothing like what it would need to have to instantly store and instantly retrieve memories, and the fact that the proteins that make up brains have average lifetimes of less than two weeks (1000 times shorter than the longest length of time humans can remember things).  Out-of-body experiences are just exactly what we would expect to have happening if mind and memory are not brain effects, but something like soul effects.  Nature never did anything to tell humans that brains make minds and that brains store memories. Neuroscientists merely jumped to such conclusions without any adequate warrant, ignoring many a reason for rejecting such conclusions.